Our favourite celebrity Halloween costumes of 2021 so far 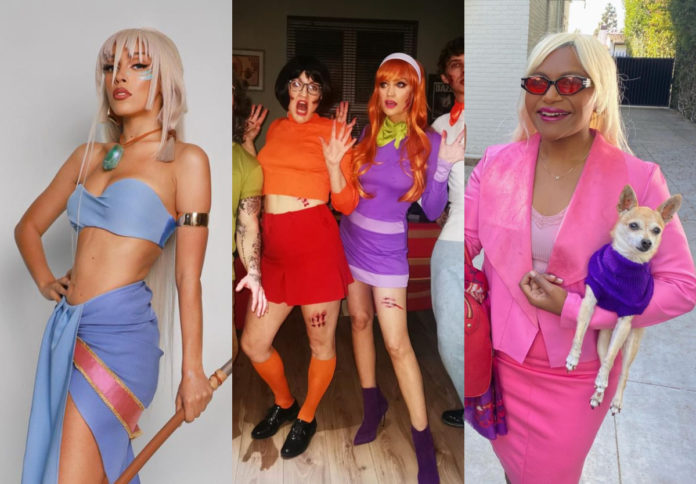 It’s officially Halloween weekend, and some of our favourite stars have gone all out with their costumes this year.

Although Halloween isn’t until Sunday, October 31 – some celebs have already got into the spirit by dressing up as some iconic characters.

We’ve rounded up some of our favourite costumes so far, and we can’t wait to see more over the coming days….

It’s not even Halloween yet and Laura Whitmore has already dressed up twice for the occasion – and she absolutely nailed both looks.

The Irish presenter dressed up as Sarah Sanderson from the family-favourite film, and she definitely looked the part!

On Friday night, the 36-year-old and her pals also dressed up as the Scooby Doo gang, with Laura taking on the role of Daphne in an all purple look.

The Blink-182 drummer donned a spiky wig and a leather jacket to complete his costume while his wife-to-be wore a blonde wig and mesh T-shirt to portray the rocker’s late girlfriend.

Sharing photos of the look to Instagram, Kourtney wrote: “till death do us part.”

Another star who nailed their Halloween costume this year is Perrie Edwards.

The Little Mix star dressed up as an ethereal golden fairy, and posed for snaps in her back garden.

The singer is currently on maternity leave, after welcoming her first child, a son named Axel, with her footballer boyfriend Alex Oxlade-Chamberlain in August.

Saweetie went all out for Halloween this year by dressing up as Catwoman.

The rapper showed off her incredible costume in a video posted on Instagram, which even featured Halle Berry – who famously played Catwoman back in 2004.

She captioned the post: “Had to put on for the best Catwoman to ever do it 🤷🏽‍♀️💅🏽 @halleberry #Saweetaween.”

The actress dressed up as some iconic female comedy legends, and asked fans to guess who she was in the comment section.

Of course, plenty of fans got the question right as they correctly guessed Amber Ruffin, Ali Wong, Julia Louis-Dreyfus as Selina Meyer, Issa Rae, and Reese Witherspoon as Elle Woods.

The Real Housewives of Beverly Hills stars attended the premiere of Halloween Kills earlier this month in support of Kyle Richards, who stars in the flick.

Her sister Kathy Hilton dressed as a dentist, Dorit Kemsley went as Kathy’s daughter Paris, while Lisa Rinna went as the pink bunny she gifted Kim Richards during an iconic RHOBH reunion.

Megan Thee Stallion looked completely unrecognizable as she transformed into Pinhead from the 1987 horror movie Hellraiser.

Referencing a line from the film, Megan captioned her Instagram post: “Pain has a face. Allow me to show you. Gentlemen I am pain.”

Doja Cat dressed up as Princess Kida from Atlantis: The Lost Empire for her underwater-themed 26th birthday party.

The singer looked stunning in a baby blue two-piece with an ice blonde wig, gold jewellery and blue face paint.

The trio dressed up as Carl, Russell and the balloon house from the 2009 Disney Pixar animated film Up for the occasion.

Steal Her Style: Maura Higgins stuns in black bikini as she soaks up the sun on holidays