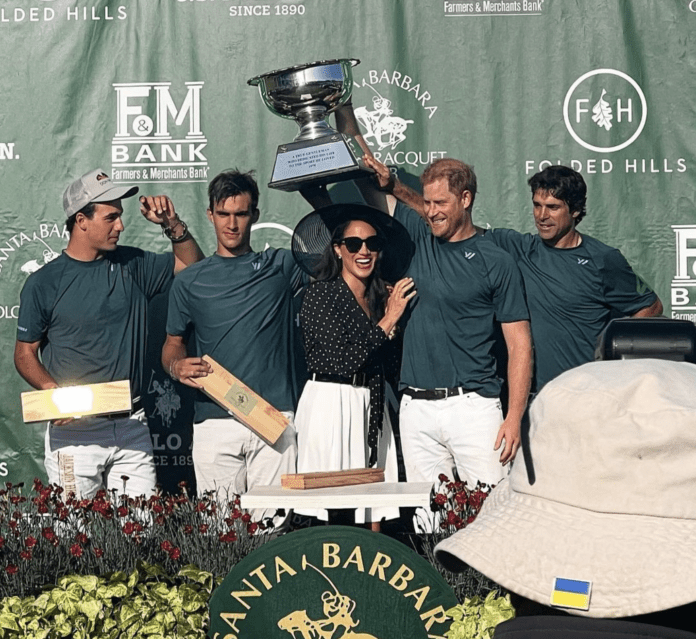 Prince Harry and Meghan Markle packed on the PDA as she supported him at a polo tournament in the US on Sunday.

The Duchess of Sussex cheered on her husband at the Santa Barbara Polo & Racquet Club in California, where Harry’s team Los Padres took home the Lisle Nixon Memorial trophy.

Meghan presented the trophy to the team, and gave each member a kiss on the cheek before she got to her husband and planted a kiss on his lips.

Sealed with a kiss pic.twitter.com/ItrKhqhPBN

The polo club is not far from the couple’s home in Montecito, where they live with their two children – son Archie, 3, and daughter Lilibet, who turns 1 on June 4.

Meghan, who was joined by her friend and former Suits co-star Abigail Spencer, looked chic in a black-and-white polka dot blouse and white shorts, which she paired with a black hat.

The couple, who are said to be filming an “at-home docuseries” for Netflix, enjoyed a day out before their much-anticipated return to the UK.

The Duke and Duchess of Sussex recently confirmed they will attend The Queen’s Platinum Jubilee celebrations with their children Archie and Lilibet next month.

This will be the first time Harry and Meghan bring both their children to the UK, but fans of the couple won’t see much of them.

According to ‘Royally Us’ co-host Christine Ross, the family-of-four will only attend “private celebrations” to honour the Queen next month.

Christine said: “Meghan and Harry will be there for the celebrations. I think that they will mostly take part in private celebrations.”

“I don’t think we’re going to see them very much, to be honest. But they’re there, they’re part of the family, but they’re not taking away from the story.”

The Platinum Jubilee, set for June 2 to June 5, will honour Harry’s grandmother’s historic 70 years on the throne.

While the Sussexes will attend the Queen’s celebrations this June, Harry and Meghan will not be invited onto the royal balcony for Trooping the Colour on June 2.

Prince Andrew, who was stripped of his military titles due to sex abuse allegations against him, will also not be present on the balcony.

Christine continued: “If they didn’t go, the story would be they’re not allowed to go. But, and if they were there and they were front and center on the balcony again, they would be the main headlines.”

“I feel like we’re going to see a lot of decisions in the next couple of weeks that are really forcing a redirection of the conversation to the Queen. All of this is about the Queen.”

The couple were invited to attend the Platinum Jubilee celebrations after they privately visited the Queen at Windsor Castle last month.

In a statement at the time, a spokesperson said: “Prince Harry and Meghan, The Duke and Duchess of Sussex are excited and honoured to attend The Queen’s Platinum Jubilee celebrations this June with their children.”