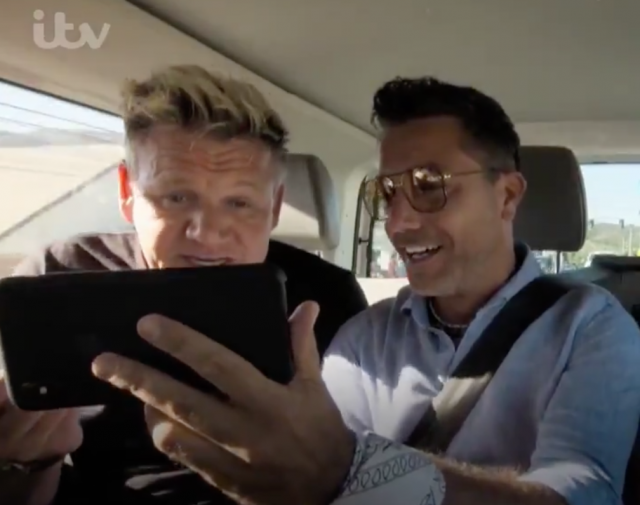 Gordon Ramsay was unimpressed when he realised that his daughter Tilly and Gino D’Acampo’s son, Luciano, were on a date together.

The celebrity chef’s reaction was caught on camera during his new show Gordon, Gino and Fred: American Road Trip.

In the hilarious scene, Gino FaceTimed his son Luciano, who revealed he was having dinner in one of Gordon’s restaurants, Heddon Street Kitchen.

Luciano then slowly panned the camera over to Tilly, and said, “Look who I’m here with,” while she shouted, “Hey dad!”

Horrified, Gordon exclaimed: “Matilda, what are you doing?!”

“We’re on a date, we’ve gone for dinner,” Luciano explained.

Gordon interrupted, “Tilly, you didn’t tell me you were going to dinner with Luciano,” while she cheekily replied, “Oh sorry, I must have forgot!”

Their co-host Fred Sirieix didn’t help matters as he joked, “Remember guys, it’s okay to kiss on the first date!”

Gino said he was delighted that his son was dating Tilly, because it gave him leverage to wind up Gordon.

Speaking on This Morning, he said: “They’ve known each other for a few years now. I don’t really want to say a lot because it’s none of my business.”

“But what a great pleasure knowing my son is dating Gordon’s daughter, just to really annoy him.”

However, Gordon seems to feel different and joked that his daughter dating Gino D’Acampo’s son was a “f***ing nightmare” during an appearance on The Jonathan Ross Show.

Gordon explained to Jonathan: “We were driving through San Francisco and FaceTiming Luciano and all of a sudden Tilly pops up behind them, and they are out having lunch. I think they are friends.”

“I have heard they are more than friends,” Jonathan laughed.

Despite their apparent romance, things didn’t work out for Tilly and Luciano, as she is now dating her current boyfriend, Seth Mack.