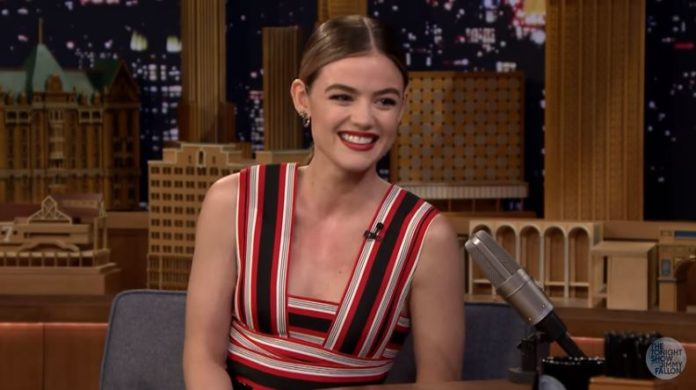 Pretty Little liars star Lucy Hale has revealed some of her guilty pleasures on The Tonight Show with Jimmy Fallon.

Jimmy first asked Lucy about her recent trip to Italy and asked why she went there.

The actress revealed that she was over at a convention called ‘Bye Con’, an event that says goodbye to TV shows.

Some of the shows that were included in the convention were Pretty Little liars, Vampire Diaries and Teen Wolf.

She also spoke about how amazing it was to be around the attendees, who are the biggest fans of the show.

“Most of the fans don’t speak English, so we have a panel and they ask us questions through Italian and then my answer is given back to them”.

Jimmy grilled the actress on her embarrassing music choices including ‘N SYNC and Hanson. The actress admitted to still being obsessed with them and said think “she is a psychopath.”

She promised her Mum that she wasn’t on Tinder before explaining that one of her friends matched with someone they thought was her.

“There is someone out there who is 26 and called Charleen, who is pretending to be me”.

Have a look at what else she has to say about catfishing.