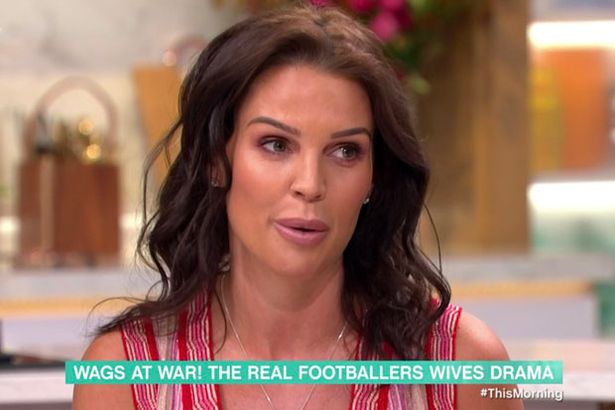 Rebekah Vardy has accused Danielle Lloyd of “making false claims” on This Morning.

The former WAG appeared on the ITV show today to talk about the controversy surrounding Rebekah and fellow WAG Coleen Rooney.

And during her interview, Danielle claimed that she’s had “run-ins” with Rebekah before.

Rebekah hit back on Twitter by denying Danielle’s claims, branding them as “utter boll***s.”

She added: “She is just fuming that I ‘didn’t get Jamie recruiting’ for her like she asked me to…”

In another tweet, she said she’s “been inundated with messages” since the scandal erupted, but said she won’t be saying anything further on the matter until she’s finished looking into the situation.

Danielle Lloyd making false claims on @thismorning that we have had ‘similar run-ins’ is utter bollocks. She is just fuming that I ‘didn’t get Jamie recruiting’ for her like she asked me to…

On a more serious note I’ve been inundated with messages from everyone but I’m not saying anything more until we’ve finished looking into this situation properly.

The 37-year-old has jetted home from Dubai, where she was on holiday, and is determined to prove her innocence.

Another WAG who has weighed in on the controversy is Nicola McClean, who appeared on The Jeremy Vine Show this morning.

Nicola, who is a friend of Rebekah, revealed the expectant mother has been forced to take her kids out of school over the scandal.

Omg she is still selling fake stories!!!! Think she would of learnt her lesson 🤥 pic.twitter.com/Zc3EDHJfh9

Danielle Lloyd hit back on Twitter after a story appeared in on The Sun titled “Danielle Lloyd ‘begged Rebekah Vardy to find her a rich footballer boyfriend’.”

“She is still selling fake stories,” Danielle wrote on Twitter.

“Think she would of learnt her lesson.”