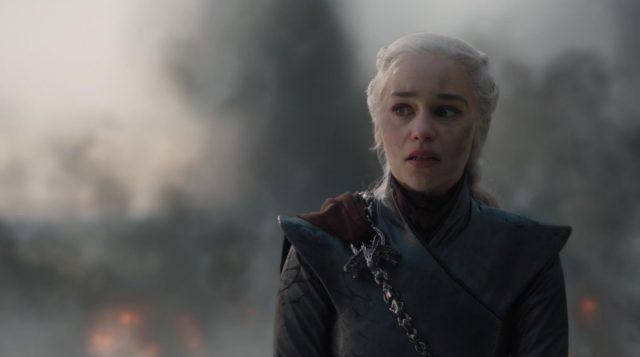 The second last episode of Game Of Thrones aired in the early hours of this morning, and it’s angered a lot of fans.

The feature length episode saw Daenerys Targaryen meet the fate she always tried to steer clear of, by turning into a Mad Queen – just like her father.

As we saw Dany burn down King’s Landing, killing thousands of innocent people, fans took to Twitter to slam the show’s writers for ruining the show’s plot.

Someone who deserved a more thought out story arc than this: #GameofThrones pic.twitter.com/1iFTJGP1Us

The writers of #GameofThrones with Dany’s character development like – pic.twitter.com/Tc6JdFOxuS

Tbh…I really don’t like how this series is ending #GameOfThrones pic.twitter.com/nQFyDolkU3

#GameofThrones all that build up and this is how Cersei goes out pic.twitter.com/Nf9UmiGUOh

Me to Daenerys in the last 40 mins of the episode : #gameofthrones #GOTS8E5 pic.twitter.com/lZwAfpiIEl

Of course, we saw plenty of major character deaths in the episode too, but Cersei Lannister’s demise had to be the most disappointing of all.

After eight seasons of Cersei being the villain, viewers were disappointed to see her killed by rubble in the end.

we waited 8 years for cersei to be killed by a bunch of rocks? #gameofthrones pic.twitter.com/XoHT2mcAAx

#gameofthrones Fans, writing theories: Arya should use the skills she learned from the Many-Faced God to kill Cersei while wearing Jamie’s face

Directors writing about her long awaited death being caused by fucking ROCKS: pic.twitter.com/PrYQck50nJ

When you wait 10 years and 8 seasons just to see Cersei Lannister get killed by a brick 🤦🏽‍♂️ #DemThrones #GameOfThrones pic.twitter.com/n2j0lzgAlT