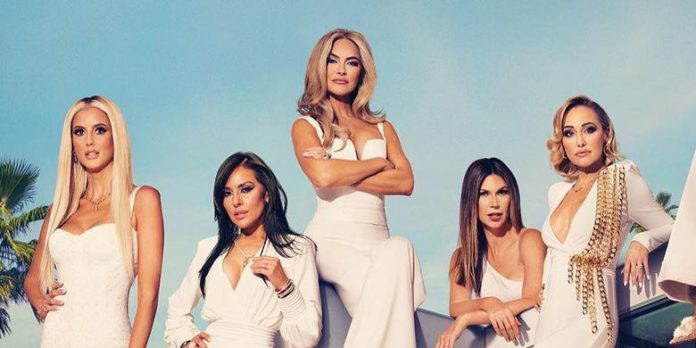 Jason and Brett Oppenheim, Chrishell Stause, Christine Quinn, Mary Fitzgerald, Heather Rae Young, Amanza Smith, Maya Vander, and Davina Potratz are all returning for another season of drama, and there are also some new faces joining the Oppenheim Group.

First up is Emma Hernan, who is the CEO of vegan frozen-food company Emma-Leigh & Co.

According to Netflix, Emma “is a self-made multi-millionaire, with big real estate clients and an even bigger heart,” who ventured into real-estate after purchasing her own multimillion dollar home.

The newly released trailer hints Emma’s arrival comes with a lot of drama, as she got engaged to Christine Quinn’s ex-boyfriend two months after they broke up.

The Massachusetts native, who has actually been working for the Oppenheim Group since 2018, moved to LA as a teenager to pursue a career in modelling and her keen interest in the stock market lead her to start a food company Emma Leigh & Co, before she eventually decided to launch a career in real estate.

She has also starred in Tough Love, Eva Luna, En Otra Piel and Super Bomberos, and has now made her move into the world of real estate.

In a press release, Netflix described her career transition “a very personal, spiritual, and emotional journey for her.”

The streaming giant added: “Vanessa has decided to start a new chapter in her life and is ready to find her way in the competitive LA real estate market.”

Sharing her excitement about her new role, Vanessa said: “Dreams do come true. It is with great honor and excitement that the official announcement was made today about me joining the beautiful and fun cast of one of the top Netflix shows, Selling Sunset and the amazing team and company of Real Estate The Oppenheim Group.”

She added: “I am so excited!  Not only because I was able to manifest this dream of blending my background in acting with my latest passion in real estate but because I want to help empower and show others to never give up on yourself or your dreams.”

“I’m beyond grateful and blessed with this next chapter of my life. I can’t wait to have you and the audience personally watch how it unfolds and I thank all of you for being on this journey with me!!!”

Check out the trailer for Selling Sunset season four below:

10 Warning Signs That Your Friend Is In an Abusive Relationship