20 Halloween Movies To Watch On Netflix 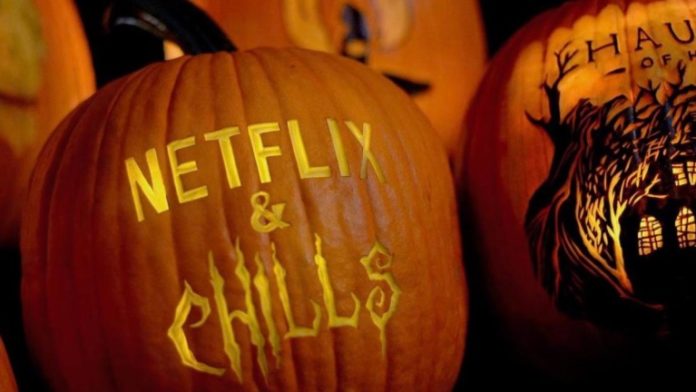 We have rounded up some spooky films to watch on Netflix this Halloween.

Whether you’re looking for something family-friendly to watch before the trick-or-treaters arrive, or a scary film that will have you jumping out of your skin, the streaming giant have got you covered.

Here are 20 Halloween movies to watch:

This comedy-fantasy film is sure to get you and your family in the mood for Halloween.

It tells the story of an evil doctor learns about an eccentric family’s missing relative, and hires an imposter to masquerade as him so that she can loot the family.

Nightbooks is a new Netflix original film based on a 2018 horror-fantasy children’s book.

When Alex (Winslow Fegley), a boy obsessed with scary stories, is trapped by an evil witch (Krysten Ritter) in her magical apartment, and must tell a scary story every night to stay alive, he teams up with another prisoner, Yasmin (Lidya Jewett), to find a way to escape.

Another Netflix original that joined the streaming giant just in time for the spooky season.

If you have young children who are excited for Halloween, this is the perfect movie to watch with them.

Dracula’s lavish five-stake resort Hotel Transylvania is where monsters and their families can live it up and no humans are allowed.

One special weekend, Dracula (voiced by Adam Sandler) has invited all his best friends – Frankenstein and his wife, the Mummy, the Invisible Man, the Werewolf family, and more – to celebrate his beloved daughter Mavis’s (voiced by Selena Gomez) 118th birthday.

For Dracula catering to all of these legendary monsters is no problem but the party really starts when one ordinary guy stumbles into the hotel and changes everything!

Halloween is a American slasher film series, and the first five parts are on Netflix right now.

The films primarily focus on Michael Myers who was committed to a sanitarium as a child for the murder of his sister, Judith Myers.

Fifteen years later, he escapes to stalk and kill the people of the fictional town of Haddonfield, Illinois on Halloween.

No One Gets Out Alive

A new Netflix original film that is sure to make you scream.

Desperate and without documentation, a woman from Mexico moves into a rundown Cleveland boardinghouse, and finds herself in a nightmare she can’t escape.

There’s Someone Inside Your House

A high school senior (played by Sydney Park) and the rest of her new school’s graduating class are being targeted by a masked killer intent on exposing their darkest secrets to the world.

The film is from the producers of Stranger Things and based on the The New York Times bestselling book by Stephanie Perkins.

A woman named Amanda lies stricken, far from home. A young boy named David questions her, trying to make her remember. She’s not his mother, he’s not her son.

As her time is running out, he helps her unravel a powerful, haunting story of obsessive jealousy, an invisible danger, and the power of a mother’s love for her child.

This brand new horror film is available to watch on Netflix now.

Benny’s entire world is turned upside down after picking up two mysterious girls who expose him to a secret world he never knew existed.

He is suddenly hurled into their cryptic underworld on a mission to save his city from dripping in blood.

The Woman In Black

A lawyer (played by Daniel Radcliffe) is assigned to travel to a village to examine a house that belonged to a recently deceased woman.

He discovers the spirit of the same woman and learns that she’s killing the village children.

This comedy/mystery family film follows Hubie Dubois (played by Adam Sandler), who thanklessly spends every Halloween making sure the residents of his hometown Salem celebrate safely and play by the rules.

But this year, an escaped criminal and a mysterious new neighbor have Hubie on high alert. When people start disappearing, it’s up to Hubie to convince the police and townsfolk that the monsters are real, and only he can stop them.

The Perron family moves into a farmhouse where they experience paranormal phenomena.

They consult  paranormal investigators and demonologists, Ed and Lorraine Warren, to help them get rid of the evil entity haunting them.

This film is definitely not for the faint of heart!

In 1994, a group of teenagers discovers that the terrifying events that have haunted their town of Shadyside for generations ​may all be connected — and that they may be the next targets.

Part 1, 2 and 3 of Fear Street are all available to watch on Netflix now.

Hush is a 2016 American slasher film about a deaf writer who retreated into the woods to live a solitary life.

She must fight for her life in silence when a masked killer appears in her window.

A Babysitter’s Guide To Monster Hunting

After a romantic evening in their secluded lake house, Emma (played by Megan Fox) awakens handcuffed to her dead husband.

Trapped and isolated in the dead of winter, she must fight off hired killers to escape her husband’s twisted plan.

The Cabin In The Woods

When five college friends (played by Kristen Connolly, Chris Hemsworth, Anna Hutchison, Fran Kranz, Jesse Williams) arrive at a remote forest cabin for a little vacation, little do they expect the horrors that await them.

One by one, they fall victim to backwoods zombies, but there is another factor at play. Two scientists (played by Richard Jenkins, Bradley Whitford) are manipulating the ghoulish goings-on, but even as the body count rises, there is yet more at work than meets the eye.

Josh and Renai move to a new house, seeking a fresh start. However, when their son, Dalton, mysteriously falls into a coma, paranormal events start occurring in the house.

Looking for an interactive Halloween experience?

The Undertaker is a short interactive WWE film that sees the New Day wrestlers seek to survive the supernatural surprises at The Undertaker’s spooky mansion.

If scary movies aren’t for you, the Scary Movie franchise just might be.