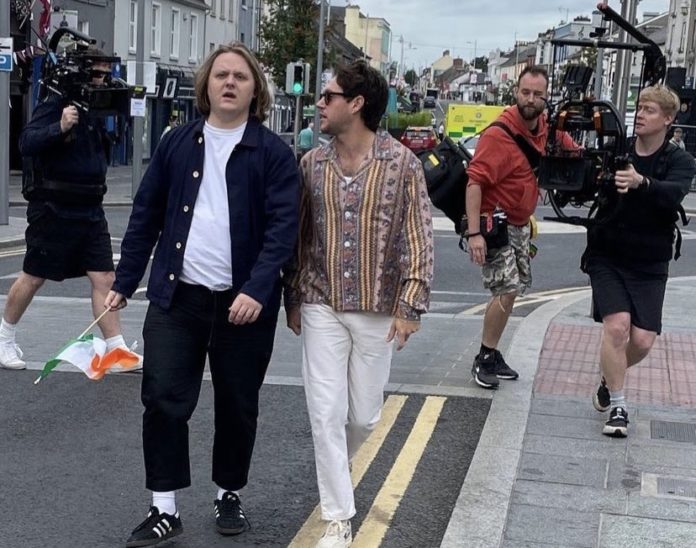 Niall Horan and Lewis Capaldi enjoyed a trip to Ireland over the weekend.

The former One Direction star and the ‘Hold Me While You Wait’ singer surprised fans on Grafton Street in Dublin on Friday evening with a busking session.

.@NiallOfficial and @LewisCapaldi performing ‘Yellow’ by Coldplay on Grafton Street in Dublin this evening 😍☘️

The singers then headed to Niall’s hometown of Mullingar on Saturday for the Fleadh Cheoil na hEireann.

They snuck into a local pub and treated fans to a performance of ‘Chasing Cars’ by Snow Patrol.

But what were Niall and Lewis doing in Ireland?

Guinness Ireland have hinted that the duo were filming an upcoming campaign with them.

The brand took to Twitter to share a snap of the pair holding a pint of a Guinness before a performance, as they teased: “Good Things Coming…”

Fueling the speculation, Niall and Lewis were spotted posing in front of the Guinness gate.

One fan tweeted: “i wonder if niall and lewis are doing a guinness ad.”

Another wrote: “was Niall and lewis filming something for a Guinness adv??? cause that would be hot”, while a third penned: “niall and lewis AND guinness ??? oh this is iconic.”

Niall with Lewis Capaldi posing for a picture in front of the Guinness gate today! pic.twitter.com/Gn8BVIOWYr