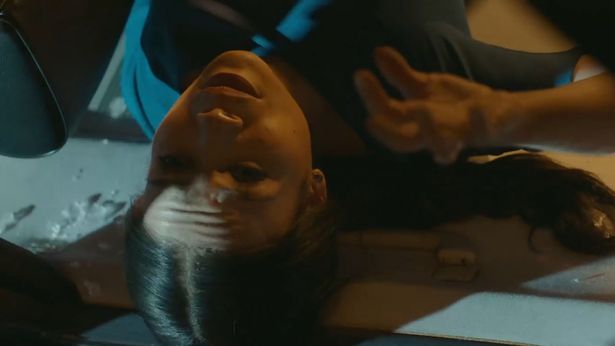 Royal fans have been left outraged over a new movie which depicts Meghan Markle ‘dying in a car wreck’ like Prince Harry’s late mother Princess Diana.

The Duke and Duchess of Sussex’s departure from the Royal family will be dramatised in the upcoming Lifetime film, called Harry & Meghan: Escaping the Palace.

According to stills from the movie, which will be released in the US this weekend, the film will open with a dream sequence in which Meghan is involved in a car accident.

In the stills, actress Sydney Morton (who plays Meghan) is seen lying in a car wreck surrounded by paparazzi.

Prince Harry (played by Jordan Dean) is then seen pushing through the mob to save Meghan, who pleads for his help.

Harry suddenly wakes up from the terrifying nightmare, and is comforted by the sight of his wife and their son Archie.

After the movie stills started circulating on social media, royal fans took to Twitter to slam the upcoming film.

Did anyone see this!?!?! That is pretty sick! https://t.co/b2XUzxzhbN

Outrage over Meghan Markle movie as she’s shown dying in car wreck like Diana Absolutely out of order, what are they thinking, this is so low I feel sick! https://t.co/kKNnyxCDiz

Wow, This is every type of wrong! Meghan Markle ‘lies dying’ after car crash at start of new TV film https://t.co/VXs3N42Pt7 via @Femail

According to Lifetime, the movie will reveal “what really happened inside the palace that drove Harry and Meghan to leave everything behind in order to make a future for themselves and their son Archie.”

In a statement, the channel said: “The movie will detail Meghan’s growing isolation and sadness, their disappointment that ‘The Firm’ was not defending them against the press’s attacks and Harry’s fear that history would repeat itself and he would not be able to protect his wife and son from the same forces that caused his mother’s untimely death.”

“Harry & Meghan: Escaping the Palace will also reveal the private family feuds between Will and Harry, Kate and Meghan, and Harry with Will and Charles, that lead to the ultimate break from the royal ties.”

This is the third movie Lifetime have made about the royal couple.