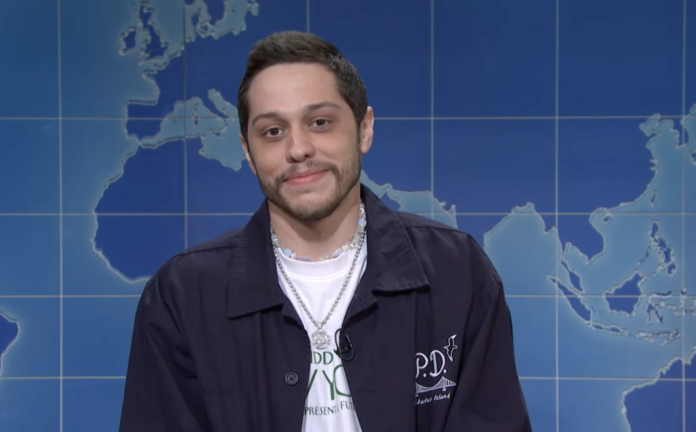 Pete Davidson has admitted he “wouldn’t be here” without his Saturday Night Live family, as he bid an emotional farewell to the show.

The comedian recorded his final episode of the sketch comedy show this weekend, after eight years on the programme.

Before bowing out of SNL, Pete had his friend Dave Sirus post a heartfelt message on his behalf on Instagram, alongside a throwback video of him hugging Jerrod Carmichael after he filmed his first sketch back in 2014.

He captioned the post: “This video was taken 8 years ago. Jerrod sent it to me last night and it made me super emotional in the best way. In the video I had just gotten back from doing my very first update and sketch.”

“It’s crazy to think that today I’ll be doing my last one. When I got the show I was 20 years old and I had no idea what I was doing. I still don’t but especially back then. I wasn’t really a sketch performer I was just a stand up.”

“I knew I could never keep up or go toe to toe with a Kenan Thompson or a Kate McKinnon so I was super scared at figuring out what I could possibly bring to or do for such a historic, respected show and platform,” he continued.

“I figured since I’m a stand up I’ll just try my stand up and personal bits on Weekend Update as myself and I’m so glad I did. I got to share so much with this audience and literally grow up in front of your eyes.” “We were together through the good and the bad, the happiest and the darkest of times. I owe Lorne Michaels and everyone at SNL my life. Im so grateful and I wouldn’t be here without them,” Pete wrote.

“I appreciate you guys always having my back and sticking up for me even when that wasn’t the popular opinion. Thank you for always believing in me and sticking by my side even when it seemed comical.”

“Thank you for teaching me life values, how to grow up and for giving me memories that will last a lifetime. SNL is my home. I’m so happy and sad about tonight’s show.”

“For so many reasons I can’t explain. Can’t wait to be back next year in a Mulaney musical number,” he added, before signing off with, “Resident young person Pete Davidson.”

Pete was just 20-years-old when he joined SNL as a featured player in 2014, making him one of the youngest cast members in the programme’s 47 seasons on air.

The Staten Island native was relatively unknown when he joined SNL, but has since made a name for himself in the world of stand-up comedy.

In recent years, the 28-year-old has also starred in a number of feature films, including a semi-autobiographical movie called The King of Staten Island.

The comedian’s dating history has also attracted plenty of media attention over the years, as his exes include Phoebe Dynevor, Kate Beckinsale, Kaia Gerber, and Margaret Qualley.

During his SNL run, Pete famously got engaged to pop singer Ariana Grande following a whirlwind romance, but the pair split after less than a year together.

The funny man is now in a high-profile relationship with Kim Kardashian, who he started dating after she hosted Saturday Night Live in October.

The reality star filed for divorce from her rapper husband Kanye West eight months prior.

The couple recently attended the Met Gala together, which attracted plenty of headlines, and it’s understood Pete will reference their romance in his upcoming Netflix comedy special.

Pete Davidson Presents: The Best Friends will premiere on the streaming platform on June 13.