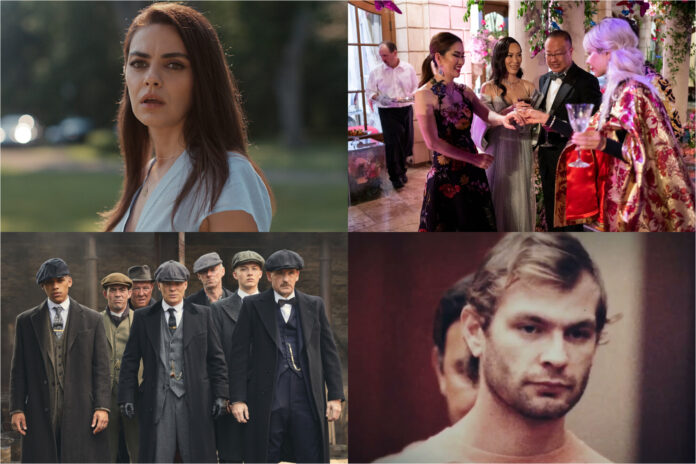 There are lots of exciting TV shows and movies joining Netflix this week.

Whether you’re a reality TV lover, a true-crime fanatic, or looking for a mystery/drama that will keep you at the edge of your seat, this week’s line-up has something for everyone.

The sixth and final season of Peaky Blinders finally joins Netflix this week.

Six brand new episodes of the award-winning show will land on the streaming giant on Monday, October 3.

Unfinished business and big opportunities stir up tension in the group, but nothing will stop them from living their flashiest and most fabulous lives.

Based on the best-selling novel, Ani FaNelli (played by Mila Kunis), a sharp-tongued New Yorker appears to have it all: a sought-after position at a glossy magazine, a killer wardrobe and a dream Nantucket wedding on the horizon.

But when the director of a crime documentary invites her to tell her side of the shocking incident that took place when she was a teenager at the prestigious Brentley School, Ani is forced to confront a dark truth that threatens to unravel her meticulously crafted life.

Conversations with a Killer: The Jeffery Dahmer Tapes

This three-part documentary series from director Joe Berlinger explores the warped mind of serial killer Jeffrey Dahmer through newly-unearthed recorded interviews with his legal team, revealing the ways that race, sexuality, class and policing allowed him to prey upon Milwaukee’s marginalized communities.

Conversations with a Killer: The Jeffery Dahmer Tapes joins Netflix on Friday, October 7.

The Mole is a high-stakes competition series and in this reimagined version, twelve players work together in challenges to add money to a pot that only one of them will win at the end.

Among the players is one person who has secretly been designated “the Mole” and tasked with sabotaging the group’s money-making efforts. In the end, one player will outlast their competition and expose the Mole to win the prize pot.

At a manor with a mysterious history, the 8 members of the Midnight Club meet each night at midnight to tell sinister stories – and to look for signs of the supernatural from the beyond.

Based on the beloved Christopher Pike book series, and brought to life by the creators of The Haunting of Hill House.

The untold story of one of the greatest comebacks in sports history.

Led by Kobe Bryant, Dwyane Wade, Carmelo Anthony and LeBron James, the 2008 US men’s Olympic basketball team had everything to lose. And everything to prove.