5 of the most SHOCKING Superbowl performances

Justin Timberlake will take to the stage for this year’s Super Bowl half-time performance, so we’re looking back at some of the biggest performances to date.

This is the third time Justin will take to the half-time stage.

He previously performed with ex Britney Spears, Aerosmith and of course, who can forget that moment with Janet Jackson.

Take a look at our five top performances:

It was 14 years ago when Justin joined Janet onstage to perform his single at the time ‘Rock your body’.

Timberlake went to remove Janet’s corset when he accidentally took off her bra to which exposed her breast.

Both singers issued apologies, however the ‘Federal communications commission’ fined the CBS Chanel $555,000 for indecency.

The band performed alongside Slash with reports at the time claiming Fergie “butchered”‘sweet child of mine’.

Dressed in futuristic metal outfits including Will I AM sporting metal silver hair, the performance was slated by NFL at the time adding that “Fergie was on auto-tune and still couldn’t hit a note”.

3. Lady Gaga is the most watched musical performance EVER

Lady Gaga appeared to jump off of the roof at NRG stadium when she performed at the Super Bowl 2017 halftime show.

The NFL confirmed it was the most watched performance, with 118 million people tuning in.

They also added that “If Lady Gaga’s performance was its own NFL week on YouTube, it would be the fifth-highest watched week of all-time,” which is remarkable.

4. Katy Perry and the shark that went viral during her performance 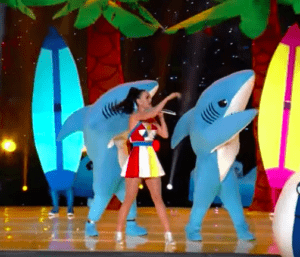 Katy Perry rocked the super Bowl in 2015, pulling out all the stops arriving on stage on top of a moving Gold tiger.

The reviews for Katy’s performance did not disappoint however, a particular man in a shark costume gained just as much coverage as Katy did when his dancing was not on cue with the other shark to the right of Katy.

5. M.I.A throws middle finger up while performing with Madonna.

Apparently the NFL was in the process of suing M.I.A for $16 million dollars back in 2014.

They reportedly sued for breach of contract and “flagrant disregard for the values that form the cornerstone of the NFL brand and the Super Bowl.”

The singer stuck up her middle finger while performing alongside Madonna at the 2012 super Bowl half time show. 222 complaints were received during her performance.

M.I.A.’s responded to the claim and described the NFL as bullies looking to “make an example” of her for “daring to challenge the NFL.”

“The claim for restitution lacks any basis in law, fact, or logic,” her paperwork said.