WATCH: Our favourite interviews from Goss At The Oscars 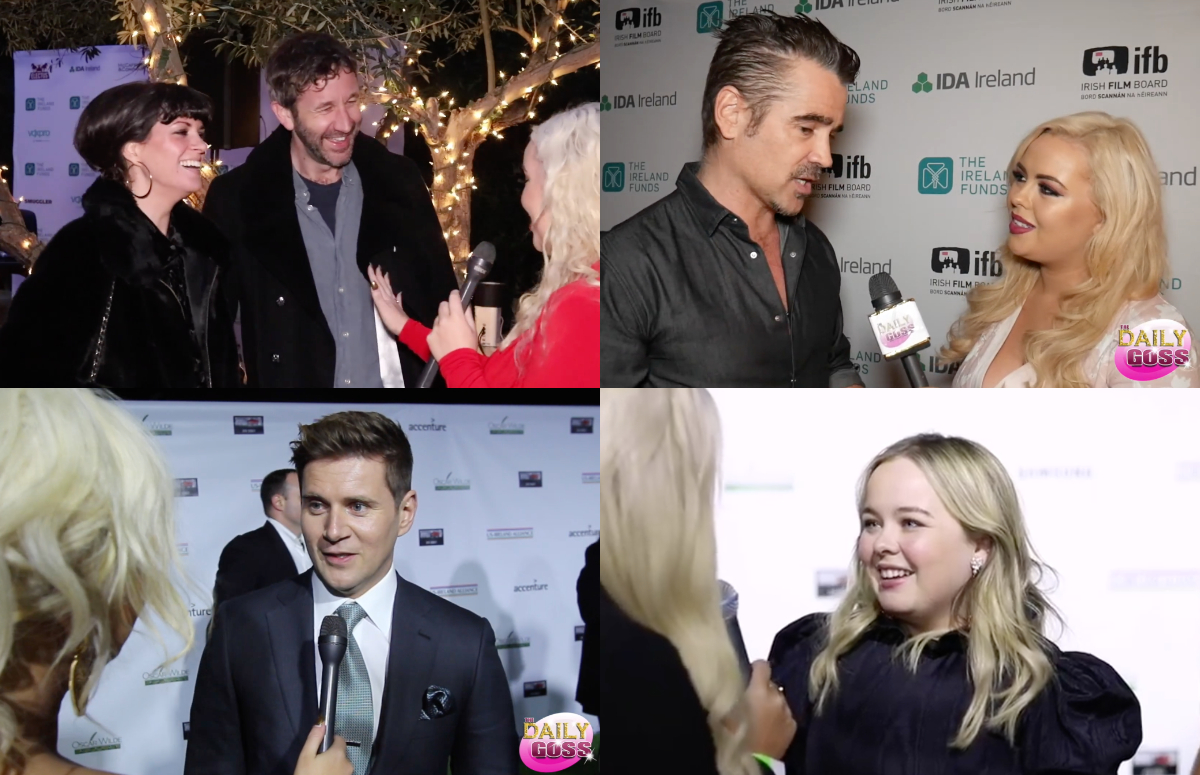 The 93rd Academy Awards, otherwise known as The Oscars, will take place at the Dolby Theatre in Hollywood tonight, April 25.

Days before the awards ceremony, some of the biggest names in showbiz attend Oscar parties across LA – including the annual Oscar Wilde party, and the Ireland Funds America bash.

Goss.ie is usually there to cover all the action from Oscars week, but due to the coronavirus pandemic, we sadly won’t be there in person this year.

With that being said, we decided to take a look back at our favourite interviews from #GossAtTheOscars over the years.

Check out our favourites below:

We caught up with Star Wars actress Daisy Ridley at the annual Oscar Wilde Awards in LA back in 2016.

The British star opened up about filming on Skellig Michael off the coast of Co. Kerry, and revealed which Irish stars she’d love to work with.

The same year, we also chatted to Irish director Lenny Abrahamson on the green carpet at the Oscar Wilde Awards.

The Dublin native was up for Best Director at the Oscars for his critically-acclaimed film Room, which also earned nominations in the Best Picture and Best Adapted Screenplay categories.

The film won Brie Larson her first Academy Award for Best Actress in a Leading Role.

Back in 2016, Ali Ryan chatted to actress and model Emily Ratajkowski at the Costume Designers Guild Awards in Hollywood.

Emily chatted about her Cork roots, and revealed her favourite thing about Ireland.

Another fun interview from 2016 was with New Girl star Lamorne Morris.

The actor chatted about flirting with Irish ladies, and his love for Colin Farrell.

We also got him to pronounce Saoirse Ronan’s name properly, after Dennis Quaid butchered it while announcing the Golden Globes nominations.

Goss.ie caught up with famed director JJ Abrams at the Oscar Wilde Awards in 2017.

JJ hosts the annual event at his Bad Robot office in Santa Monica every year.

During our chat, JJ got emotional as he opened up about screening Star Wars: The Last Jedi for terminally ill fans before the film was released.

On the same green carpet, we chatted to Caitriona Balfe about Outlander, and how the show has changed her life.

The Dublin native admitted it felt surreal to be at the event, as she attended the same bash six years prior as a struggling actress.

Goss.ie caught up with our very own Colin Farrell at the Ireland Funds America party in LA back in 2018.

The Irish actor chatted about his role in Fantastic Beasts and Where to Find Them, and shared his disappointment over not getting the call for the second movie.

At the same party, we chatted to Irish actress Victoria Smurfit, who was hosting the star-studded event.

We also caught up with Irish actor Chris O’Dowd about fatherhood, and the time Lenny Abrahamson directed him in a Meteor ad.

Back in 2018, Goss.ie chatted to Irish actress Sarah Bolger on the green carpet at the annual Oscar Wilde Awards.

The Dublin native chatted about missing Ireland, and revealed her hopes to work with Cate Blanchett.

In 2019, we caught up with Allen Leech at the annual Oscar Wilde Awards.

The Irish actor spoke about the success of Bohemian Rhapsody, in which he played Paul Prenter, and the buzz of Oscars season.

Allen also promised “great surprises and great sadness” in the Downton Abbey movie, which was released later that year.

The same year we also chatted to comedian Kathy Griffin.

Kathy opened up about her Irish heritage, and spreading her father’s ashes in Ireland a few years ago.

We caught up with Chris O’Dowd once again at the annual Ireland Funds America party in 2019.

Joined by his lovely wife Dawn O’Porter, the Irish actor chatted about filming Get Shorty, and reuniting with his Bridesmaids co-star Melissa McCarthy during Oscars week.

Frankie opened up about getting sober, and shared how proud he was of his sister Ariana following the release of her ‘thank u, next’ album.

We also spoke to Lady Gaga’s personal makeup artist Sarah Tanno, who chatted about doing the singer’s makeup for A Star Is Born, and getting ready for the Oscars.

We had a lovely chat with Nicola Coughlan at the Oscar Wilde Awards just last year.

The Irish actress had just met with Shonda Rhimes, the executive producer of Bridgerton, at the time.

Since then, the Galway native has achieved international fame for her role as Penelope Featherington in the hit Netflix series.

Earlier this year, Bridgerton became the most successful show in the history of Netflix, after the period drama was watched by 82million households in its first 28 days of release.

We caught up with JJ Abrams once again at the Oscar Wilde Awards in 2020.

The film director discussed his love for Ireland, and revealed he was in talks to shoot an exciting project on the Emerald Isle.

Here’s what is leaving Netflix this month