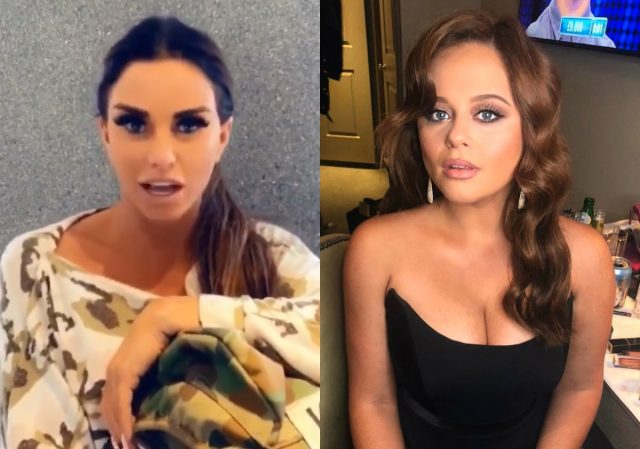 Katie Price has brutally slammed Emily Atack in a furious social media rant, over a joke she made about her on I’m A Celebrity’s spin-off show Extra Camp.

Earlier this week, the TV presenter suggested her co-hosts Joel Dommett and Adam Thomas needed to get tested for STDs, after they took a dip in the same pool Katie and her ex Peter Andre once hooked up in.

Responding to Emily’s comment on her Instagram Story today, Katie uploaded a video of her holding the backpack she had in the jungle back in 2004.

.@KatiePrice has slammed Emily Atack in a furious social media rant over THAT ‘STD’ jibe 👀😬 pic.twitter.com/Ot6C6kEGyA

In the video, Katie rages: “So Emily Atack, you think it’s clever do you to slag me off? Who are you anyway? Looks like I’m coming for you.”

“You got something to say to me, don’t say it behind my back on telly, say it my face.

“All the men I know you’ve been with haven’t got a good thing to say about you,” she said, before waving her hand in front of her face and saying, “Urgh, fishy.”

Emily is yet to respond to Katie’s rant.