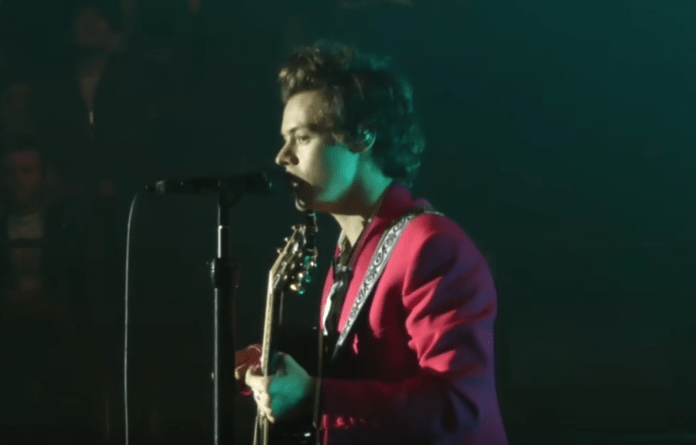 Harry Styles performed at the Manchester Arena on Monday, and he made sure to pay tribute to the victims of the devastating bombing that claimed the lives of 23 people last year.

The former One Direction star has been performing Ariana Grande’s song Just A Little Bit Of Your Heart, which he co-wrote, while on his tour.

However, the song had a particularly special meaning as he performed in the Manchester Arena on Monday – where 23 people lost their lives in a terrorist attack last year during an Ariana Grande concert.

Before performing the track, Harry said, “I grew up coming to my first concerts in this room, I love this room.”

“The next song that we’re going to play for you a few years ago, and I gave it to a singer called Ariana Grande.

“She sang it a few times, and now we’re going to do our version of it for you – and if you can find some way to join in please do so. I stand with you, Manchester.”

In May 2017, 22-year-old Salman Abedi detonated a homemade bomb at the end of Ariana Grande’s concert, killing 23 people and injuring over 500.

The devastating incident was the deadliest terror attack to hit the UK since the London bombings back in 2005.

In the wake of the terrorist attack, Ariana and her team organised the One Love Manchester tribute concert, which was held at Old Trafford two weeks after the attack on June 4, 2017.

According to reports, the concert raised over £10million for the British Red Cross and Manchester Emergency Fund.