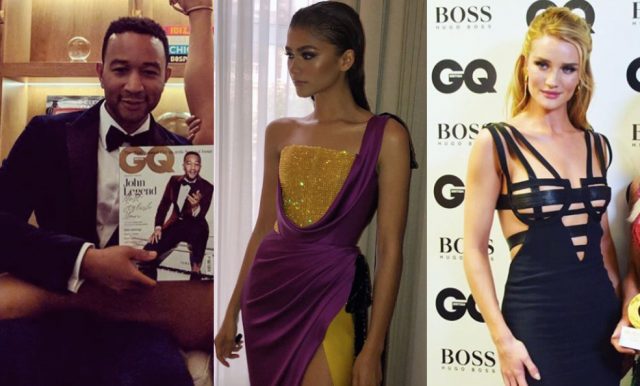 The award ceremony was held at the Tate Modern in London, with a wide range of celebrity guests in attendance.

From Zendaya to Prince Charles, there was a wide range of famous faces.

Some Irish stars also made an appearance, including Laura Whitmore and Ronan Keating.

Here are our picks for the top ten best dressed at the award ceremony.

The actress turned heads in this striking dress, which resembled a greek goddess.

The stunning dress by Ralph & Russo, featured a yellow sequinned corset, which also had a purple fabric draped over the shoulder.

The 22-year-old is currently filming the sequel to Spider-Man in London.

The model wowed on the red carpet wearing a custom black gown by Versace.

The dress featured an array of cut-out panels across the bodice for modesty.

The mother-of-one kept her accessories to a minimum, wearing only her engagement ring and earrings.

The Irish presenter went for a stunning LBD dress.

The one shoulder dress featured both black lace and velvet, which she paired with incredibly high Louboutins.

The 33-year-old, who just celebrated her birthday, attended the award ceremony with her boyfriend Iain Sterling.

Rita Ora as per usual had all eyes on her in this daring outfit.

Like Zendaya, the signer also donned a Ralph and Russo sheer diamante gown for the evening

She matched her risqué outfit with a bold metallic eye look, and styled her platinum blonde locks into a sleek, straight-style that was parted down the middle.

Naoimi looked as ever the iconic supermodel.

The 48-year-old opted to wear a bandeau bodycon mini dress from the Versace SS19 collection, alongside matching over-the-knee boots.

The dress was previously worn by Kendall Jenner on the Versace runway show.

Tom Hiddleston bringing So. Much. Yes. to the GQ Men of the Year Awards in this velvet, wide lapel tuxedo from Ralph Lauren. (More on the blog link in stories) . . . #tomhiddleston #ralphlauren #gqawards #gqmenoftheyear

Married to one of the GQ Men of the year, unfortunately not John Legend @albertaferretti 👠@casadeiofficial clutch @emmkuony @chopard

The Australian looked like a classic Hollywood actress in this breath-taking black gown.

She attended the event with her husband Sacha Baron Cohen, who was one of GQ’s Men of the year.

The presenter definitely turned heads with her outfit choice.

Caroline wore a dress by Halpern, the bustier-style piece is cut from satin and saturated in sequins, set in a bold zebra pattern.

The 38-year-old walked the red carpet alongside an excitable Professor Green, with the two joking and laughing together; while her on again/off again fiancé Andrew Brady stayed at home.

Kylie stepped out for the award show in a simple yet gorgeous Stella Mccartney gown.

The metallic slip dress looked fabulous on the singer.

The former Neighbours actress attended the event with her new boyfriend, Paul Solomons, and the two looked extremely loved up.

The model made her first red carpet appearance since giving birth to her second child.

She attended the event with her husband John Legend, who won the ‘Most Stylish Man of The Year’ award.