Nicole Scherzinger shared a sexy snap with Thom Evans, as they celebrated their first Valentine’s Day together.

The 41-year-old singer and the 34-year-old rugby star posted a photo from inside a swanky hotel room, as they enjoyed a romantic Valentine’s breakfast on Friday.

Thom went shirtless for the loved-up snap, while Nicole posed in a cute monogrammed pyjama shirt.

She captioned the post: “A toast to LOVE day y’all ♥️ #HappyValentinesDay.”

Nicole and Thom started dating while he appeared on The X Factor: Celebrity last year.

The rugby player competed as part of the boy band Try Star, and Nicole acted as a judge alongside Louis Walsh and Simon Cowell.

The pair were linked before the show came to an end, but didn’t go public with their romance until after the finale.

Before Thom, Nicole was in a long-term relationship with tennis player Grigor Dimitrov, who she dated for four years. 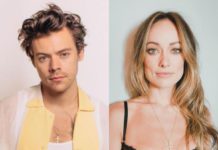