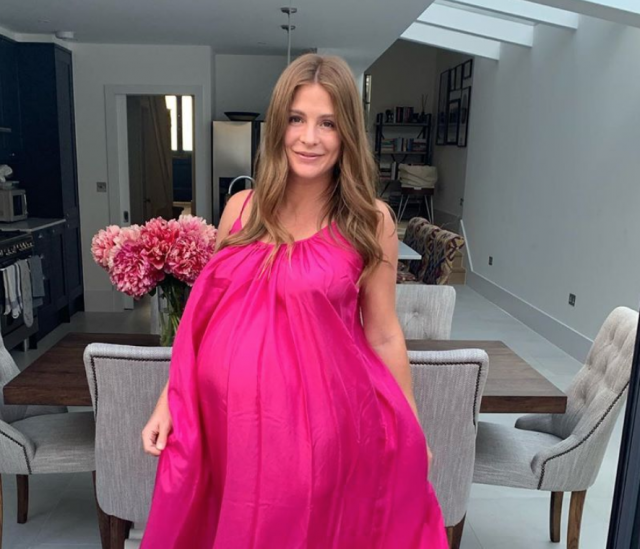 Millie Mackintosh has opened up about her struggle to accept her post-pregnancy figure.

The 30-year-old and her husband Hugo Taylor welcomed their first daughter, Sienna Grace, back in May.

After sharing a “raw and unedited” photo of herself on Instagram last week, Millie revealed that she struggled with the pressure to “bounce back” after giving birth.

“In the weeks after giving birth to Sienna, I was struggling with my body image,” she wrote for Grazia.co.uk

With Sienna nearing 10 weeks old nothing has given me more purpose than knowing that a small life depends entirely on me to feed and nourish her as she grows. I try to live a healthy, balanced lifestyle and I count myself lucky that throughout my adult life I’ve felt and identified as pretty body confident but now all that has changed along with every other aspect of my life, which makes me look at my body in a totally new light and it’s been a big adjustment! Fitting into my pre pregnancy clothes seems a long way off and I have no intention of rushing into ‘getting my body back’ but it would be a lie if I said I feel totally happy and at one with my body post pregnancy. The process has been made a lot harder by some overly strong and hurtful comments online about my appearance (as much as you try and ignore them). I’m in awe of what my body has achieved over the last year but I find it hard not seeing the girl I know to be me looking back at me in the mirror. I now see photos of myself pre-pregnancy and remember thinking at the time I didn’t like my body at certain angle but now I look back and think I looked great! It’s made me realise how critical I am of myself and how it’s so crucial, as women, that we learn to let ourselves off the hook. My mantra has always been that you exercise because you love your body not because you hate it, so any movement I do now is with the intention to feel good and never to punish myself. Sienna is worth every extra inch, pound and stretch mark. My body made me a Mother and for that I'll always be grateful 💗 #postpartumbody

“Having always felt pretty confident in my own skin it was such a shock seeing my body after birth.”

“I had this newfound respect for what my body had done, growing a tiny human inside it, and yet at the same time, seeing myself look so different made me really upset.”
“I’ll admit, I’ve compared myself to other women, to friends even, and how they looked post-baby. “How come they could fit into their jeans so quickly and I can’t?” I thought.”
The former Made In Chelsea star admitted that she is in no rush to regain her pre-pregnancy figure and is focusing on her newborn daughter instead.

“I have a new shape, new curves and new boobs which I’m loving, and while it’s still a struggle, I’m accepting my body more and more every day kangaroo pouch and all!” she ended the essay.

Taking to the social media platform last week, Millie posed in her underwear with her daughter and confessed that she was “in awe” of what her body had achieved since she became a mother and that Sienna was worth “every extra inch, pound and stretch mark.”