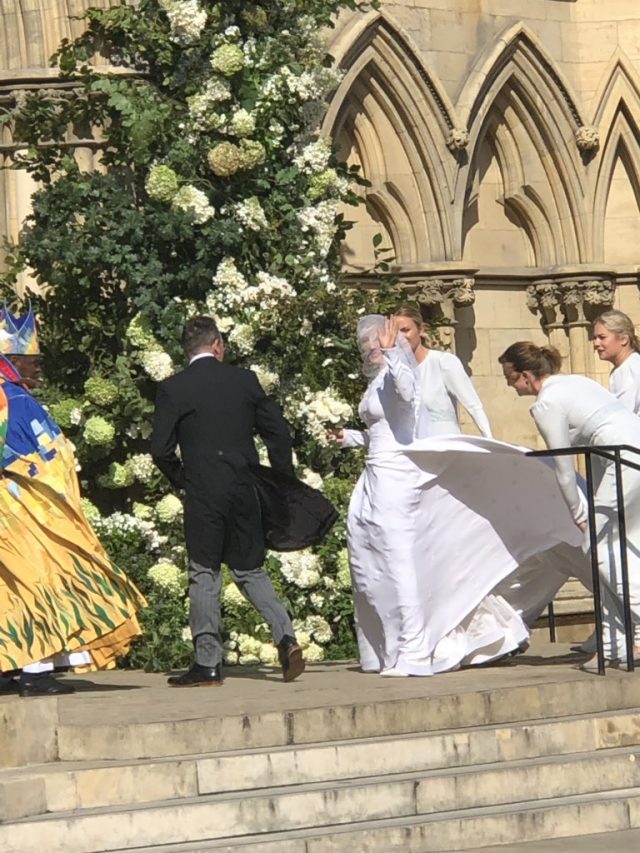 Ellie Goulding has married Caspar Jopling in a star-studded ceremony in York.

The singer surprised fans by wearing a long-sleeve, high-kneck gown, completely covering up her body.

There was an array of famous faces at her nuptials, with stars like Katy Perry, Orlando Bloom, James Blunt and Sienna Miller all in attendance.

Sarah Ferguson was also in attendance, she joined her daughters Princess Eugenie and Princess Beatrice.

Despite their father Prince Andrew currently facing alarming claims of sexual misconduct with a 17-year-old girl, the duo looked happy as they smiled for fans outside the church.

Prince Andrew and the Buckingham Palace have vigorously denied the claims.

Ellie has had strong links to the royal family for years – even performing at Prince William and Kate Middleton’s wedding.

Fans lined the streets trying to catch a glimpse of Ellie, 32, as she headed in to tie the knot.

Ellie was seen with several bridesmaids – who also all wore full-length white gowns.

The singer arrived in a blue camper van, and was 25 minutes late to the ceremony (as most brides are).

Ellie chose an electric VW Minibus from 1972, having the car crested by Irish company Electrifi.

Goss.ie can reveal Ellie really wanted “a zero carbon car for the wedding” and she chose between 4 cars before picking the VW.e

The couple’s reception takes place in North Yorkshire’s lavish stately home Castle Howard – with many suggesting Ellie is having a wedding easily compared to that of a Royal wedding.