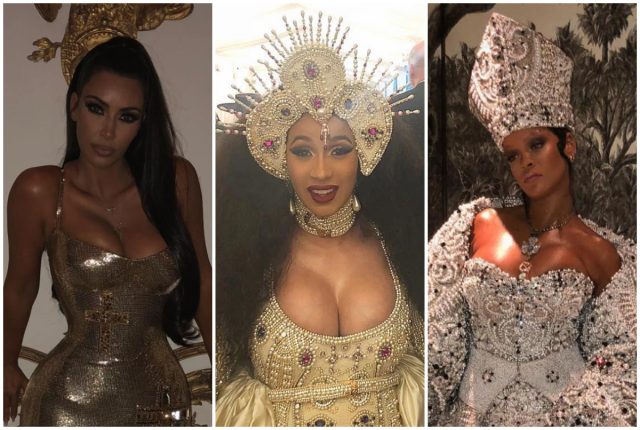 The annual Met Gala is one of the most-anticipated fashion events of the year,

The theme this year was Heavenly Bodies: Fashion and the Catholic Imagination – and attendees definitely didn’t disappoint on the red carpet.

While most celebs nailed their red carpet look, some got it SO wrong. But first, let’s start with who got it right.

She shocked us all by deleting everything from her Instagram last week… but now, she’s back, and she’s claimed her Met Gala crown.

The dress featured a crystal encrusted bustier which cascaded into a dramatic full skirt, with an over-sized embroidered train. We LOVE!

Although we know some people were disappointed by the simplicity of Kylie’s look – we absolutely loved it.

The new mum made her red carpet debut with her rapper beau Travis Scott in a custom Alexander Wang sculpted velvet gown, with an exposed duchess satin bralette.

The 20-year-old paired the look with some diamond encrusted cat-eye shades.

We know it’s very different from her usual glittering gowns, but we think Kylie can rock anything.

Rihanna definitely NAILED the theme for this year’s Met Gala.

The singer acted as a co-chair alongside Anna Wintour, Donatella Versace, and Amal Clooney this year – so it was imperative that she impressed on the red carpet.

We realise that her look is totally mad – but nobody can pull it off better than RiRi.

Taking Pope-chic to the next level, Rihanna rocked a custom made Maison Margiela Artisanal outfit, designed by John Galliano.

The photoshop police can definitely take a night off, because there was no denying Kim Kardashian’s INCREDIBLE curves on the Met Gala red carpet.

Kim went for 90s supermodel glam, and of course used her own makeup brand, KKW Beauty, to complete her look.

As for the men, Chadwick Boseman definitely won in the style stakes.

The actor, best known for his role as Black Panther in the Marvel movies, looked serioulsy handsome in a white, custom-made Atelier Versace tuxedo, which was matched with a bejewelled cross cape.

Just like Rihanna, Chadwick nailed the theme this year.

Ariana looked so gorgeous as she walked the Met Gala red carpet for the first time.

The singing sensation looked beautifully angelic in a custom Vera Wang gown, which was printed with images from the Sistine Chapel.

She can do no wrong in our eyes!

Another star that donned a suitably mad outfit was Zendaya – but it totally worked in her favour.

Honestly, we have NO idea what SJP was thinking.

The Sex and the City star wore a Dolce and Gabbana Alta Moda corset gown, which featured a cathedral train embroidered with gold baroque embellishments and sacred hearts.

We understand that she was going with the theme, but this is just all kinds of wrong.

We get what she was going for, but it’s just way too try-hard for us…

While we absolutely adore Cardi B, we don’t have the same affection for this look.

The pregnant rapper teamed up with Jeremy Scott and Moschino for her first Met Gala, but it was just a little OTT in our opinion.

In her own words, Be Careful Cardi…

We only have one word for Kendall’s Met Gala look, and that is… boring.

The model wore an Off-White jumpsuit, which was designed by Virgil Abloh.

While Kendall looked beautiful as always, it was just a little too safe for the Met Gala.

Scarlett Johansson’s Met Gala look had everyone talking, and not for the right reasons.

The actress shocked on the red carpet by wearing a gown from Marchesa, the label partly funded by disgraced Hollywood producer Harvey Weinstein, and co-founded by his soon-to-be ex-wife Georgina Chapman.

Definitely a curious choice, but perhaps Scarlett was trying to send a message of forgiveness by wearing Marchesa?

Either way, the dress didn’t exactly wow on the red carpet.

We hate having Miley on the Worst Dressed list, but we really didn’t love her look last night.

The singer bared all in a very plunging black gown by Stella McCartney, but she was just a little too close to a nip-slip in our opinion.