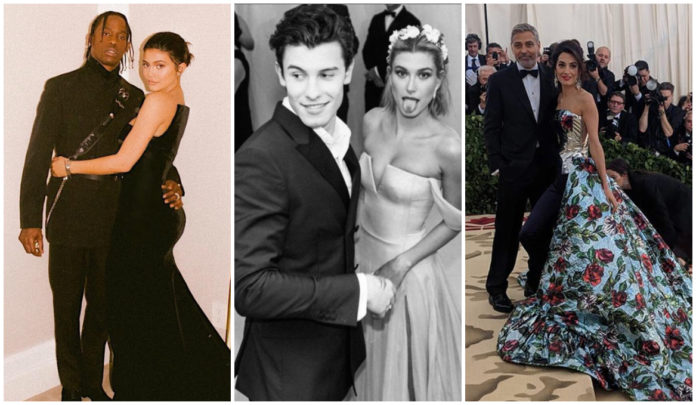 The Met Gala is one of the most anticipated celebrity events of the year – and a-list couples always make quite the entrance on the red carpet.

From our all-time fave couples, to new budding romances, we love seeing who arrives with who.

2018 was a particularly loved-up year, as plenty celeb couples stepped out for the event, which had a ‘Heavenly Bodies: Fashion and the Catholic Imagination’ theme.

From new parents Kylie Jenner and Travis Scott, to George and Amal Clooney – we’ve listed our fave couples from the red carpet this year.

In case you didn’t already know, Shawn Mendes and Hailey Baldwin confirmed their relationship by attending the 2018 Met Gala together.

The couple have been linked for a few months now, but now they’ve decided to finally make it official – and they look SO cute together.

The lovebirds both wore Tommy Hilfiger for the special occasion.

They were the first couple to arrive on the carpet, and they certainly made an impression.

The pair welcomed twins last year, and have been looking more loved-up than ever.

Amal joined Anna Wintour, Donatella Versace, and Rihanna as hosts on the night, and wore a look designed by Richard Quinn.

Another young couple to confirm their romance at the 2018 Met Gala was Riverdale co-stars Lili Reinhart and Cole Sprouse.

The couple, who play Betty Cooper and Jughead Jones in the hit series, have fought rumours of romance for well over a year now – but they’ve finally let the cat out of the bag, after they were papped kissing in Paris earlier this year.

Lili and Cole both looked effortlessly chic in H&M on the red carpet.

One of our all time favourite couples has to be Tom Brady and Gisele Bündchen.

The pair have been together for over a decade, and they’re still looking as hot as ever.

The couple both donned Versace on the red carpet, of course.

These two are definitely the couple of the moment.

The singer and the pro-baseball player are no strangers to a red carpet, but this has to be one of our favourite looks from these two.

The pair both wore Balmain for the a-list event.

And last, but certainly not least – we have to talk about Kylie Jenner and Travis Scott.

The couple, who welcomed their first child Stormi in February, finally made their red carpet debut at the 2018 Met Gala.

The new parents stunned in Alexander Wang, as they happily posed for the paparazzi.