Prince Harry is reportedly worried for his wife Meghan Markle, as her estranged family continue to hit headlines.

In recent months, Meghan’s father Thomas has told the press that he’s been “cut off” by his daughter, while her estranged sister Samantha continues to bash her publicly.

Now, sources have told Vanity Fair that Harry is making moves to protect Meghan from too much media exposure.

A source revealed, “He worries there is too much hysteria around Meghan and he wants to row back a bit.”

The insider added that the couple have told friends to avoid speaking to the media, by saying, “They both expect a code of silence. If you talk to the press you’re out.”

“Harry didn’t used to care that much about what was written (in the press), he just said it was a load of sh**e, but he’s very protective of Meghan and defensive these days.”

Royal editor Camilla Tominey has claimed that Harry has constructed an “emotional fortress” around them.

“Harry has certainly built an emotional fortress around himself and Meghan. They have both been extremely upset by Thomas Markle’s behavior and that of Meghan’s half sister, Samantha,” she said.

The news comes after Daily Express royal correspondent Richard Palmer took to Twitter to claim that reporters are “being kept further away from her [Meghan Markle] than we were before the wedding.”

He went on to explain, “That means we can’t hear what she is saying. If you can’t get direct quotes from members of the Royal Family that often makes for dull stories.”

“So, just as with Kate, that inevitably leaves you with little else to write about except what she wore and looked like. They are too lovebirds so it is quite sweet but these stories have limited shelf life.”

He added, “My hope is that when they come back from their summer break, Meghan will be given a bit of a freer rein to express herself (within earshot of the media) and get stuck into some of the serious topics she wants to tackle. She has the soft power to help many people in this world.”

“What she wears will always be of interest to some readers, of course, but it doesn’t have to be all of the story.” 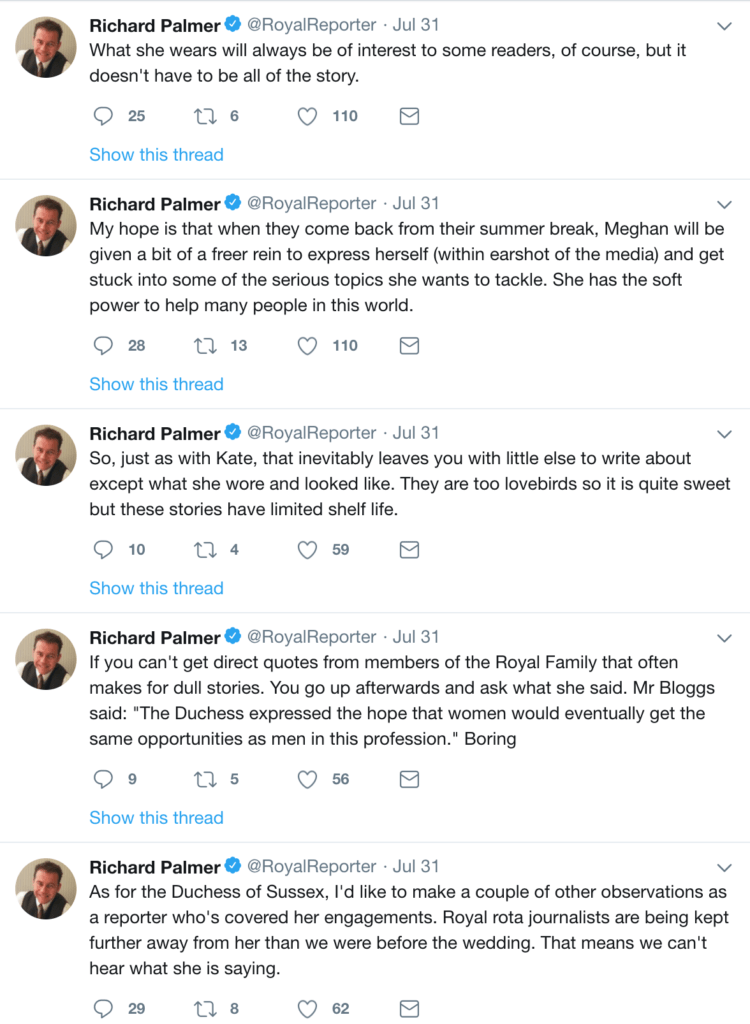