Johnny Depp has claimed that he “lied” to protect Amber Heard, after she allegedly severed his finger by throwing a glass bottle at him.

This morning, the Hollywood actor took the witness stand in London’s Royal Court for the third day of his libel trial against The Sun – over a 2018 article which labelled him a “wife beater”.

The Pirates of the Caribbean star has denied being physically abusive towards his ex-wife, but News Group Newspapers are defending the article’s publication by trying to prove that he was.

During today’s proceedings, the court heard about an alleged incident that took place in Australia back in 2015 during “an alcohol and drug-addled rage”.

The 57-year-old alleged his finger was severed and fractured after Amber threw a glass bottle at him, and that he could see the “bone sticking out”.

NGN’s barrister Sasha Wass stated that prior to his break-up from Amber, Johnny had said he didn’t know how he got the injury, or else said that he was responsible himself.

Johnny then claimed that he had to lie about his injury at the time, in order to “protect” Amber.

“At the time that I had to give the news to the production company that I wouldn’t be working the next day, I lied to production and to anyone who had anything to do with production,” Johnny responded. “I told them I had slammed it in a door. To protect Ms Heard.”

According to Amber, Johnny “severely injured his finger” while smashing a telephone against a wall after they got into a row.

Johnny denied this claim, and alleged Amber threw a glass vodka bottle at him, which smashed and fractured his finger, before she put “a cigarette out on [his] right cheek”.

“I couldn’t believe that we had come to this. I wondered what more she could do to me.”

Samantha Wass suggested he turned on his ex-wife and said he didn’t love her, before grabbing her by the throat and saying it would be “easy to crush her neck”.

“Fabricated and vicious,” Depp replied, stating the allegations were “untrue”.

In court yesterday, lawyers released an image of Johnny lying on a hospital bed following the alleged incident, as well as an image of the severed finger.

“Amber severed my finger with the second of two thrown vodka bottles at me in the early afternoon of Sunday March 8,” he stated in his witness statement.

“Amber claims this was on the second day of a ‘three-day hostage situation’. Amber claims that during these three days, I subjected her to a variety of what sounds like torture and other abuse,” he continued.

“These sick claims are completely untrue.”

The trial is expected to continue over the next three weeks. 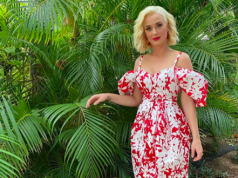