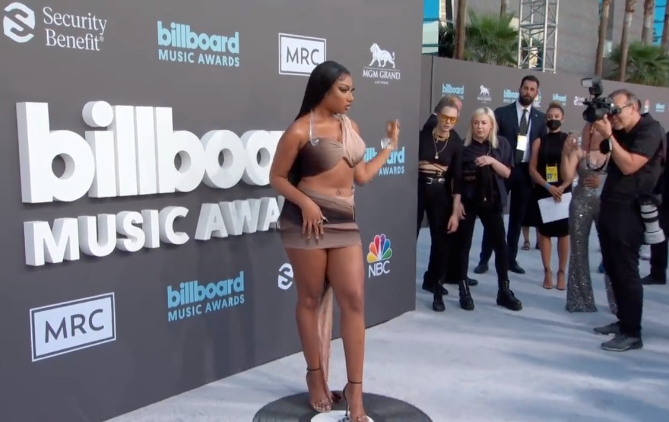 Back in May, footage of the pair at the red carpet event went viral, as fans noticed the model’s lingering presence around the rapper.

Photos and video clips from the night showed Cara peeking her head out from behind a corner, as Megan posed for photos in her custom Mugler outfit on the red carpet.

cara in the back…? yea megan needs to file a restraining order pic.twitter.com/CXkZFU7wSH

Later in the night, the 29-year-old made another unexpected appearance as she popped up between Megan and Doja Cat in the audience.

Cara was also by Megan’s side when she nabbed the award for Top Rap Female Artist, and fans were bothered by the model’s enthusiastic reaction to her winning.

While many fans were confused by Cara being attached to Megan’s hip all night, the 29-year-old has explained the rapper personally invited her to the awards show.

Speaking on The Tonight Show Starring Jimmy Fallon, the actress said she was already in Las Vegas with friends when Megan asked her to come along to the BBMAs.

“I really wanted to see her play and she asked me to come along with her,” she said.

“I didn’t know I was going to go and sit or do anything, I thought I was just going to come and watch her play.”

Addressing the photos of her lingering around Megan on the red carpet, Cara said: “I was helping her and I was doing it, and I was going like, ‘Yeah girl!’ I was hyping her up, being a hype woman.”

“She had a speech she was going to do because she was winning an award, so I was helping her run her lines.”

“And then I was getting on the floor and taking photos, because thats what I do, I was just really excited.”

“I was living my best life, but people found it a bit odd. People find me a bit odd, but that’s me. No shame,” Cara added.