The show is inspired by the tragic death of Conrad Roy, who died by suicide in 2014 at the age of 18.

His girlfriend Michelle was later convicted of manslaughter, after shocking text messages revealed she encouraged Conrad to take his own life.

The official synopsis for the eight episode series states: “Inspired by the true story of Michelle Carter’s unprecedented ‘texting-suicide’ case.”

“The series explores Carter’s relationship with Conrad Roy III and the events that led to his death and, later, her conviction of involuntary manslaughter.”

Conrad Roy met Michelle Carter while on a trip to Florida in 2012, and discovered they only lived an hour from each other in Massachusetts.

They started a long-distance friendship which eventually turned romantic… until it all came crumbling down.

On July 13, 2014, Conrad was found dead in his truck at the age of 18. It was parked in a car park behind a supermarket in Fairhaven, Massachusetts.

His death was ruled a suicide by carbon monoxide poisoning. The police did not stay with this ruling.

After Conrad was reportedly missing, 17-year-old Michelle contacted his mother Lynn. She said she was concerned about Conrad’s whereabouts and wanted to know if the police had been contacted.

After his body was found, Michelle then texted his sister saying: “Conrad did not kill himself because of bullying like everyone assumes. I know the real reasons.”

Michelle attended Conrad’s memorial and introduced herself to his family for the first time.

Conrad’s mother Lynn was vaguely familiar with her, having known her son had ‘met someone’ back in 2012, whom he had since been regularly texting.

She assumed Michelle was her son’s girlfriend, as one of his suicide notes, that were left in his room, was addressed to her.

But when police searched Conrad’s, they found all of his messages with Michelle – and it changed everything.

The pair bonded over their mental health struggles. Michelle was isolated at school, and suffered from anxiety and an eating disorder. And Carter struggled with severe depression, as he already attempted suicide several times before.

Their relationship was mostly through text messages and emails, and their mental health struggles dominated most of the conversations.

When Michelle compared them to Romeo and Juliet, Conrad replied: “But you know what happens at the end,” referring to their suicides.

Michelle told Conrad: “If you want it as bad as you say you do, it’s time to do it today.”

Commonwealth v. Michelle Carter or ‘The Texting Suicide Case’ was held in June of 2017.

This marked the first time a person was accused of manslaughter via text message.

The evidence stacked against Michelle was damning. There was a total of 317 pages of messages between her and Conrad. In them, Michelle actively encouraged Carter to commit suicide.

In one text, sent weeks before Conrad died, Michelle wrote: “You better not be bullshitting me and saying you’re gonna do this and then purposely get caught.” 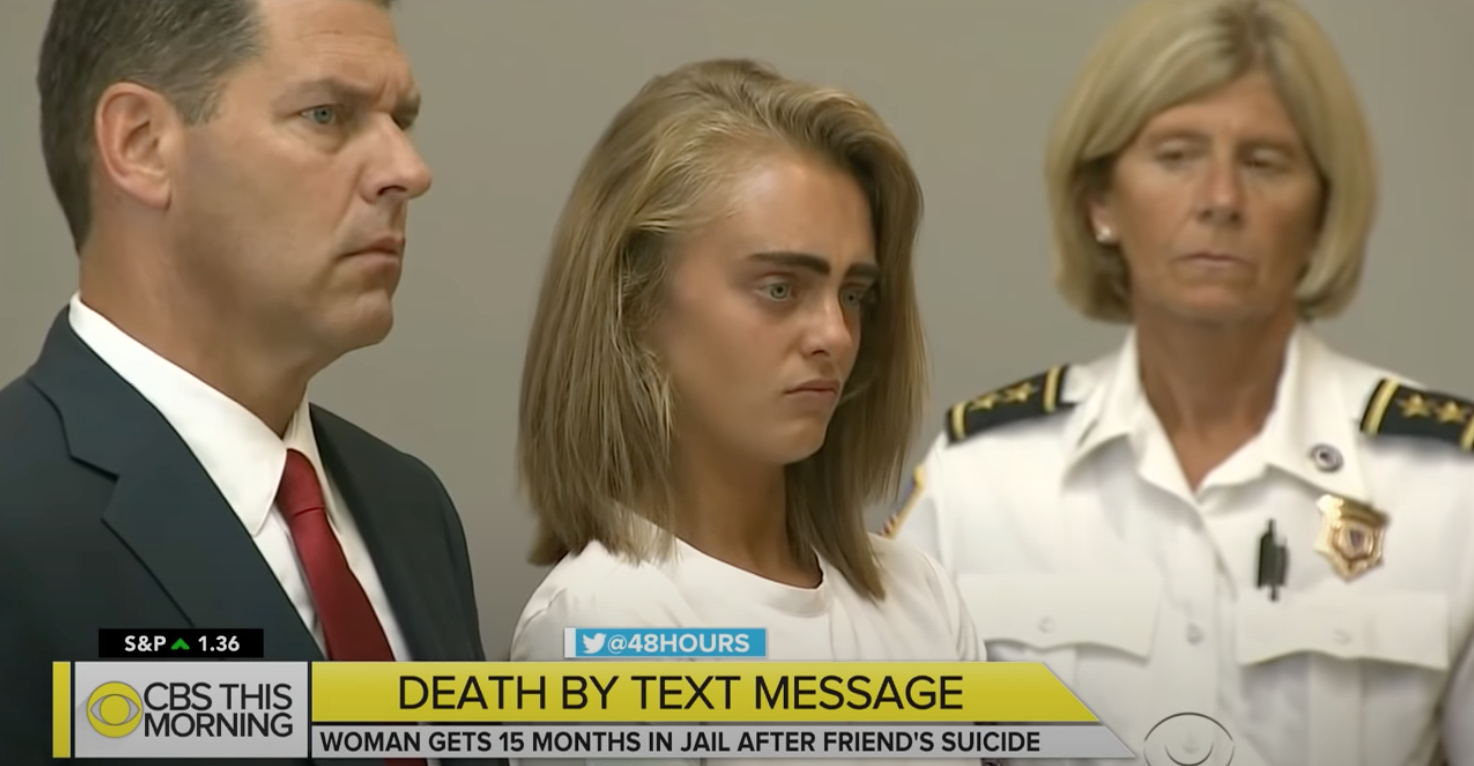 Michelle’s defence argued that a person cannot be held liable for the actions of another in that regard, that her words – though controversial – did not physically kill Conrad.

However, Conrad’s phone records show he was on two calls to Michelle in the hours he died – the latter of which the court believes was at the exact time of his death in the truck.

Michelle never alerted the authorities, or his family. In fact, in a message she sent later to a friend, Michelle admitted: “I f**king told him to get back in.”

Judge Lawrence Moniz said the main justification for this ruling was due to the calls between Carter and Roy in the moments before his death.

He stated she had had an opportunity to prevent his death and did not act. She did, he argued, quite the opposite, and “(her) failure to act, where she had a self-created duty, constituted each and all wanton and reckless conduct”.

Michelle was sentence to two and a half years in prison and five years of probation after that. 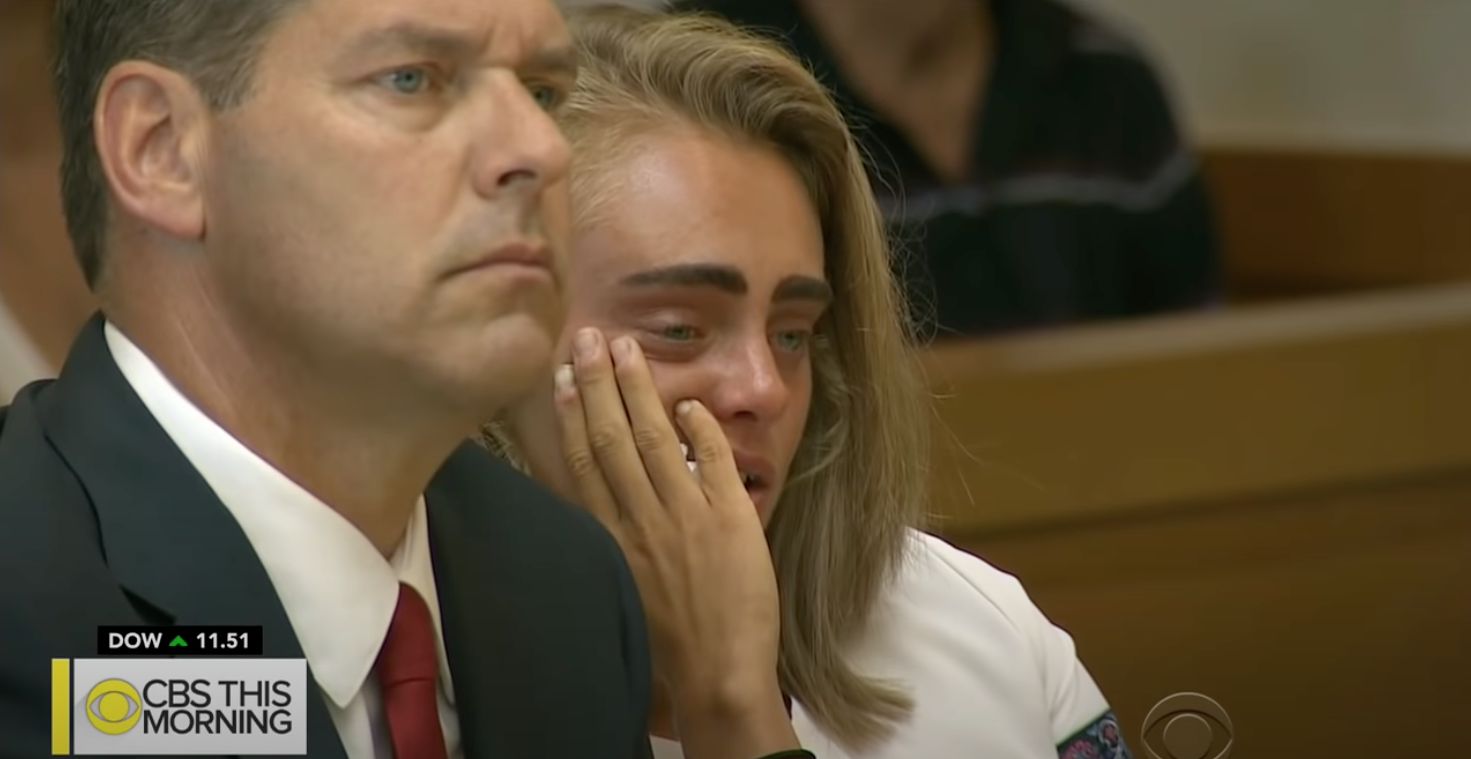 She was released from prison in January 2020, three months early, due to good behaviour.

Michelle remains on probation until August, after which time she will be permitted to both leave the US and make money from her story.

The Girl From Plainville joins Amazon Prime on July 10.