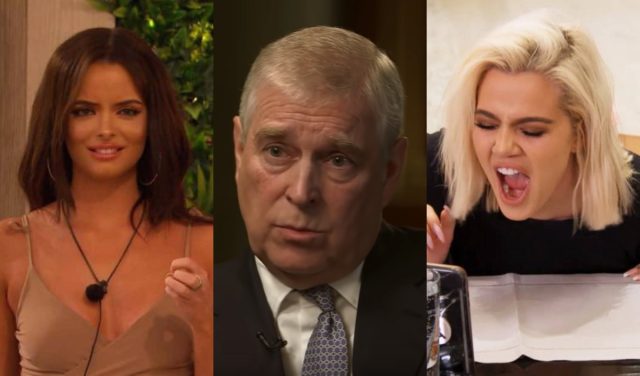 2019 gave us some of the decade’s biggest TV moments.

From our very own Maura Higgins becoming a feminist icon, to the world meeting Prince Archie for the first time – we’ll all been glued to our TV screens this year.

So with that in mind, Goss.ie have put together a list of this years biggest TV moments, just so you can relive this year and remember some of what will go down in history.

70-year-old Caitlyn Jenner had an emotional exit from the I’m A Celeb jungle.

Fans were crushed when she emerged from three weeks in camp, and was met by no one at the end of the bridge.

Fans criticised her famous family for not supporting her on the show, but the Kardashian-Jenner clan have since claimed that no one from the show contacted them.

When Tom Walker dared to disrespect Longford native Maura Higgins on Love Island, she was quick to put him in his place.

The Pussycat Dolls reunite on The X Factor

Sophia stands up to bullies on The Late Late Toy Show

When Sophia Maher appeared on The Late Late Toy Show and spoke about bullying, we were all left in tears.

The young girl spoke about facing bullies who kick her and call her “weirdo.”

She recalled her experience to host Ryan Tubridy, who told her that differences should be worn like a “badge of honour.”

Everyone’s favourite meme of 2019 Baby Yoda came from the Disney+ show The Mandalorian.

The adorable character has captured the hearts of people who aren’t even fans of the show, or Star Wars.

Harry Styles recently filled in for presenter James Corden on his US talk show The Late Late Show with James Corden.

During his stint, he played the shows feature game Spill Your Guts or Fill Your Guts with guest, and ex-girlfriend Kendall Jenner.

The game saw Kendall ask Harry what songs on his first album were about her.

Instead of answering, he opted to chow down on some cod sperm.

However, it worked in her favour in the end as she went on to win the show with Irish man Greg O’Shea.

The final ever scenes of Game of Thrones

When HBO favourite Game of Thrones ended this year, the final scenes divided fans across the world.

The conclusion of the show saw Bran Stark take the Iron Throne, and Jon Snow kill his lover, Daenerys, both of which outraged fans.

When we found out Ben Foden would be competing on X Factor: Celebrity as part of a boyband called Try Star, we weren’t sure how to take the news.

However, when he got on stage and performed No Diggity with Thom Evans and Levi Davis – we were left in awe.

The rugby players blew us away with their voices, becoming our favourites to win the show.

Mairead Ronan crowned the winner of Dancing With The Stars

Today FM presenter Mairead Ronan blew us all away with her moves on Dancing With The Stars earlier this year.

And in March, she was rightfully crowned the winner of the show.

While Red Table Talk is more of a web show than a TV show, this particular episode still deserves to be part of this list.

Jordyn Woods appeared on the show hosted by Jada Pinkett Smith to tell the truth about her kiss with Tristan Thompson.

Jordyn confessed to snogging the boyfriend of Khloe Kardashian, her best friend Kylie Jenner’s sister – causing the biggest Kardashian-Jenner drama of the year.

When it was revealed that Caitlyn Jenner would be heading into the I’m A Celeb jungle alongside Ireland’s own Nadine Coyle, we couldn’t wait to see if a friendship would blossom.

And thankfully we weren’t let down, as Nadine gave us one of the most iconic moments of the year when she taught Caitlyn, Jacqueline Jossa and Adele Roberts the dance routine to Girls Aloud’s hit song Promise.

After news of Tristan Thompson’s infidelity broke, fans were shocked.

While Jordyn appeared on Red Table Talk to deal with the aftermath, we got to see how Khloé dealt with the situation through Keeping Up With The Kardashians.

Everyone loved Anna Vakili and Jordan Hames together on Love Island this summer.

And when the 24-year-old finally asked 27-year-old Anna to be his girlfriend, fans of the show rejoiced.

But just days later, he decided to crack-on with India Reynolds – and it caused one of the biggest rows in Love Island history.

Back in March, Emmerdale broadcast an episode with an all-female cast to celebrate International Women’s Day.

The episode put the wheels in motion for some of the shows upcoming storylines, including that of Lisa’s death.

This episode marked the beginning of the end for Jane Cox who starred on the show for 23-years.

The 18-year-old beat thousands of hopefuls to join girl group Real Like You.

The band inevitably won the show, which only featured four episodes.

In May, Meghan Markle gave birth to her first child.

Prince Harry and the Duchess welcomed son Archie to the world, and presented him to British media for the first time – a moment which will go down in history.

Ireland was left devastated on November 4th when it was announced that Gay Byrne had died.

The RTÉ broadcaster passed away after a battle with cancer.

The next day, the network broadcast a special episode of The Late Late Show dedicated to Uncle Gaybo.

Prince Andrew appeared on Newsnight with the approval of The Queen to discuss his friendship with convicted sex-offender Jeffery Epstein.

The interview was dubbed a disaster by the media, as the Duke of York appeared flustered by the presenter’s questions, and stumbled over his answers.

When £80,000 went missing from her bank account, Audrey Roberts assumed it was her lover and known con, Lewis Archer.

Lewis died the same day and Audrey never got to say goodbye.

It then transpired that the thieves were none other than her own two grandsons Nick and David.

Niall Horan gave us the funniest TV moment of the year when he read ‘Twas the Night Before Christmas in loads of different accents.

He appeared on The Tonight Show with Jimmy Fallon where he donned a festive scarf and read the poem with accents including Scottish, Spanish and Russian.