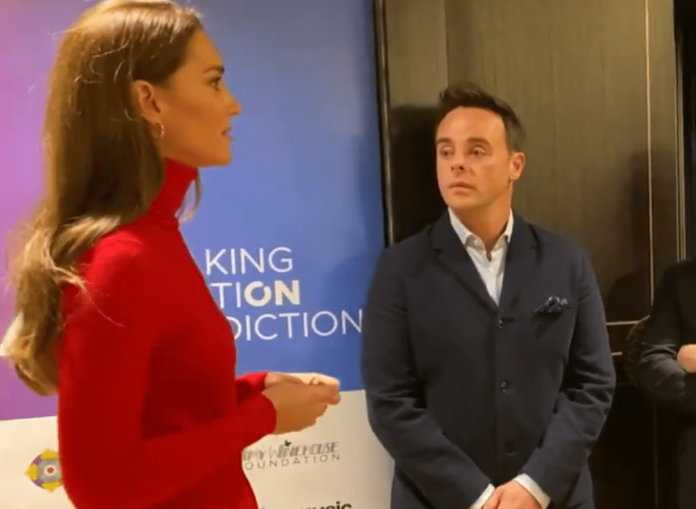 Ant McPartlin has opened up about his battle with addiction to Kate Middleton, Duchess of Cambridge.

The presenter attended the launch of the Taking Action on Addiction campaign on Tuesday, where Kate delivered a passionate speech on the impacts of addiction.

Ant became addicted to painkillers after a knee operation in 2015, and crashed his car three years later while more than twice the alcohol limit, before entering rehab.

— The Duke and Duchess of Cambridge (@KensingtonRoyal) October 19, 2021

Speaking to the Ant at Tuesday’s launch, Kate said: “Post-lockdown, looking at the stats it’s really worrying what families are going through.”

“Even hearing some of the stories today, there’s that feeling that you have to carry that secret alone and actually once you start sharing your stories, people have either experienced it themselves or know someone that’s gone through addiction.”

Ant, who was joined by his close friend and co-presenter Declan Donnelly at the launch, admitted: “I found that myself. By the time I asked for help, it was bad, but as soon as you opened up to people, problems have got to disappear. It gets better and help is there.”

Dec added: “You hear from so many people that things didn’t change until they hit rock bottom, and if we can stop people hitting rock bottom, wherever that is, and get the help much earlier it would make such a difference.”

The Duchess of Cambridge was surprised by Ant & Dec today as she bumped into them on her way to the Taking Action on Addiction event.

Kate chatted to the duo about the importance of people speaking out about addiction and listened to Ant share his own experience with addiction. pic.twitter.com/u05D1zH7UJ

In her speech, the Duchess said: “Addiction is not a choice. No one chooses to become an addict. But it can happen to any one of us. None of us are immune.”

“Yet it’s all too rarely discussed as a serious mental health condition. And seldom do we take the time to uncover and fully understand its fundamental root causes.”

She added: “The journey towards addiction is often multi-layered and complex. But, by recognising what lies beneath addiction, we can help remove the taboo and shame that sadly surrounds it.”