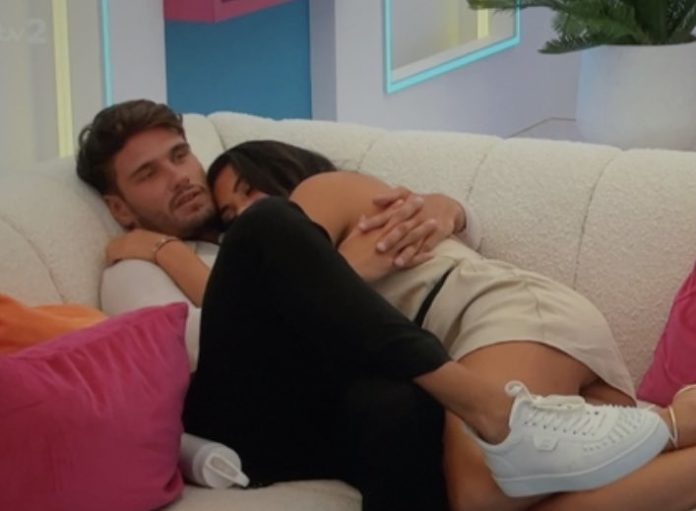 So much happened during Friday night’s episode of Love Island, but fans can’t stop talking about two Islanders in particular – Paige Thorne and Jacques O’Neill.

The couple were separated during tonight’s recoupling, as Jay Younger picked Paige instead of Ekin-Su Cülcüloğlu, leaving Jacques to couple up with Danica Taylor.

But that didn’t stop the pair from sharing some seriously cute moments during the episode.

After the recoupling, the pair went for a chat inside, and Jacques told Paige how much he likes her.

The rugby player said he had come into the villa looking for a “best friend”, and confessed he had found that in her within just 10 days.

Despite being coupled up with Jay, they agreed to continue their burgeoning romance, and shared a sweet kiss on the couch.

Later in the episode, Jacques and Paige got into separate beds with their respective new partners Danica and Jay.

But as their beds were next to each other, the pair were seen holding hands after the lights went out in the bedroom.

It’s safe to say viewers were swooning over Jacques and Paige during the episode, and took to Twitter to agree they’re definitely the cutest (unofficial) couple in the villa.

Sad Cry Watching Jacques & Paige Hold Hands We Them Back Together 😢👫 #LoveIsland pic.twitter.com/2eKNagXOEd

STOP JACQUES AND PAIGE ARE SO CUTE #loveisland pic.twitter.com/jgdNOO6Rdw

paige and jacques holding hands across the bed #loveisland pic.twitter.com/ah2sXLhLvF

im so obsessed with jacques and paige omg #loveisland pic.twitter.com/Bpkv9Xei6N

paige and jacques are so fucking cute i can’t watch this #LoveIsland pic.twitter.com/C6FascUoCq

I CANT DEAL WITH PAIGE AND JACQUES HOLDING HANDS ITS SO CUTE #LoveIsland pic.twitter.com/hE7QOUkr4P

nah jacques kissing and holding paige’s hand before bed j bc she’s in another bed is wholesome ☹️ jay is a shit #LoveIsland pic.twitter.com/5m10NJiJ5s