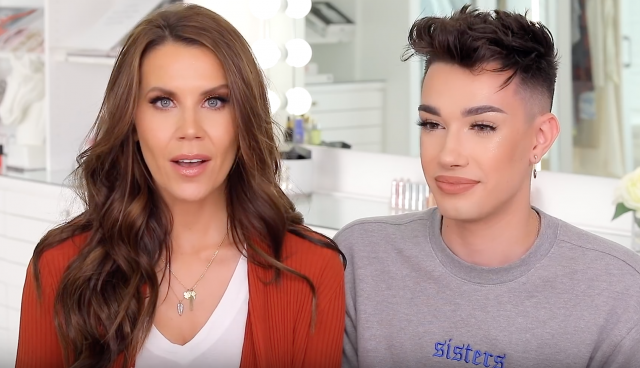 We don’t know about you, but we’re still enthralled by the drama going on between YouTubers James Charles and Tati Westbrook.

The 19-year-old has lost millions of followers and subscribers ever since Tati “exposed” his alleged inappropriate behaviour over the weekend – and the drama is still continuing to unfold.

In case you didn’t know, their feud erupted when the pair fell out over James partnering with hair vitamin brand Sugar Bear Hair in exchange for Coachella artist passes.

James and Tati have been friends for years, and Tati owns rival vitamin brand Halo Beauty – so James partnering with SBH was considered a huge stab in the back.

Defending his decision, James claimed that SBH contacted him about the artist passes, after they heard he was being mobbed by fans in the VIP area.

However, fellow YouTube star and influencer Nikita Dragun has now gotten involved in the drama – and revealed that James contacted HER to get in touch with Sugar Bear.

Taking to Twitter, Nikita shared screenshots of texts between her and James during Coachella weekend.

She wrote: “Heard a situation needed some clarification. my friend was in an emergency and texted me in the moment… unfortunately since @dragunbeauty used all of our marketing budget on the 𝓯𝓪𝓷𝓽𝓪𝓼𝔂, i connected him with sugar bear. nothing shady.”

heard a situation needed some clarification 👀 my friend was in an emergency and texted me in the moment… unfortunately since @dragunbeauty used all of our marketing budget on the 𝓯𝓪𝓷𝓽𝓪𝓼𝔂, i connected him with sugar bear. nothing shady. pic.twitter.com/fNNtMReApm

Following Nikita’s tweet, some fans defended James by tweeting: “Why is he expected to only use HER brand though? Last time I checked sugar bear was the main company giving VIP passes to YouTubers so if that’s the only way he knew how to get VIP why is that bad.”

However, others pointed out that the 19-year-old should have just left the festival, rather than betraying his best friend by partnering with her rivals.