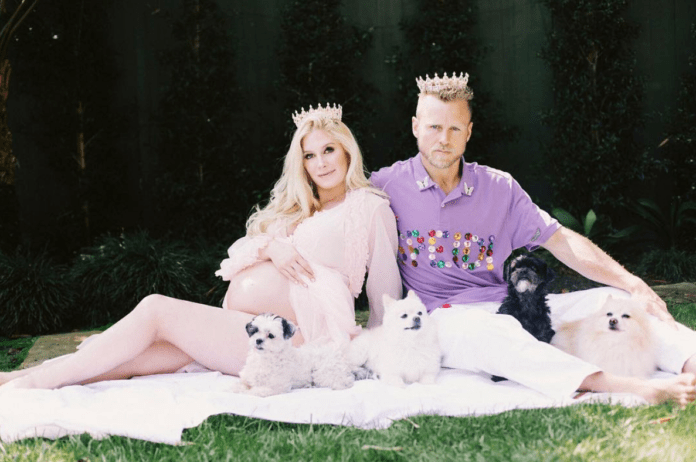 The couple named their baby boy Gunner Stone, and now the new parents have revealed their son’s godmother – and you may recognise her from The Hills.

Gunner Stone’s godmother is none other than Jen Bunney.

Taking to her Instagram story, Heidi said, “I have one of Gunner’s godmothers here, Jen Bunney.”

Jen “you did something shady” Bunney is @heidimontag and @spencerpratt‘s son’s Godmother. I hope Brody Jenner is the Godfather. pic.twitter.com/4u4SCBAtC0

Jen then raises her wine glass and says, “We’re celebrating Gunner. He’s the best baby ever. We love him so much. ”

For those who are unfamiliar with Jen Bunney, she was a childhood friend of Lauren Conrad – and appeared on MTV’s Laguna Beach and The Hills.

Jen caused PLENTY of drama on The Hills, as she apparently hooked up with Lauren’s on-again-off-again love interest Brody Jenner.

Although Jen and Heidi are no longer friends with Lauren – it looks like they’ve grown even closer over the years.

The news comes after Spencer’s sister Stephanie Pratt, who also starred in The Hills, exclusively told Goss.ie that she wasn’t expecting to be godmother to her nephew.

“They’re probably going to choose Madonna or someone crazy as the godmother,” she said. “So yeah, I’m not really holding my breath for that. There’s probably a few people before me.”

Stephanie’s comments hint that her reported dispute with her brother and Heidi may still be ongoing, after she admitted to finding out about Heidi’s pregnancy on the internet.

“It was on my birthday and I literally just saw it on my phone. I was mad. I haven’t spoken to him since,” Stephanie previously told Heat magazine.

“I have a feeling [my whole family] knew. I think I’m literally the only person who didn’t. I just felt really left out. I don’t feel part of my family.”

And just last month, the Made in Chelsea star appeared to take a swipe at her brother on social media by publicly blasting “poisonous” family members.