Justin Timberlake has publicly apologised to his wife Jessica Biel after he was caught holding hands with his co-star – but people aren’t happy with his statement.

Last month, the actor was papped holding hands with Alisha Wainwright during a night out in New Orleans, where they have been filming their upcoming movie Palmer.

In a statement posted on Instagram, Justin said he “should have known better” and seemed to blame alcohol for his behaviour.

He wrote: “I stay away from gossip as much as I can, but for my family I feel it is important to address recent rumours that are hurting the people I love.” 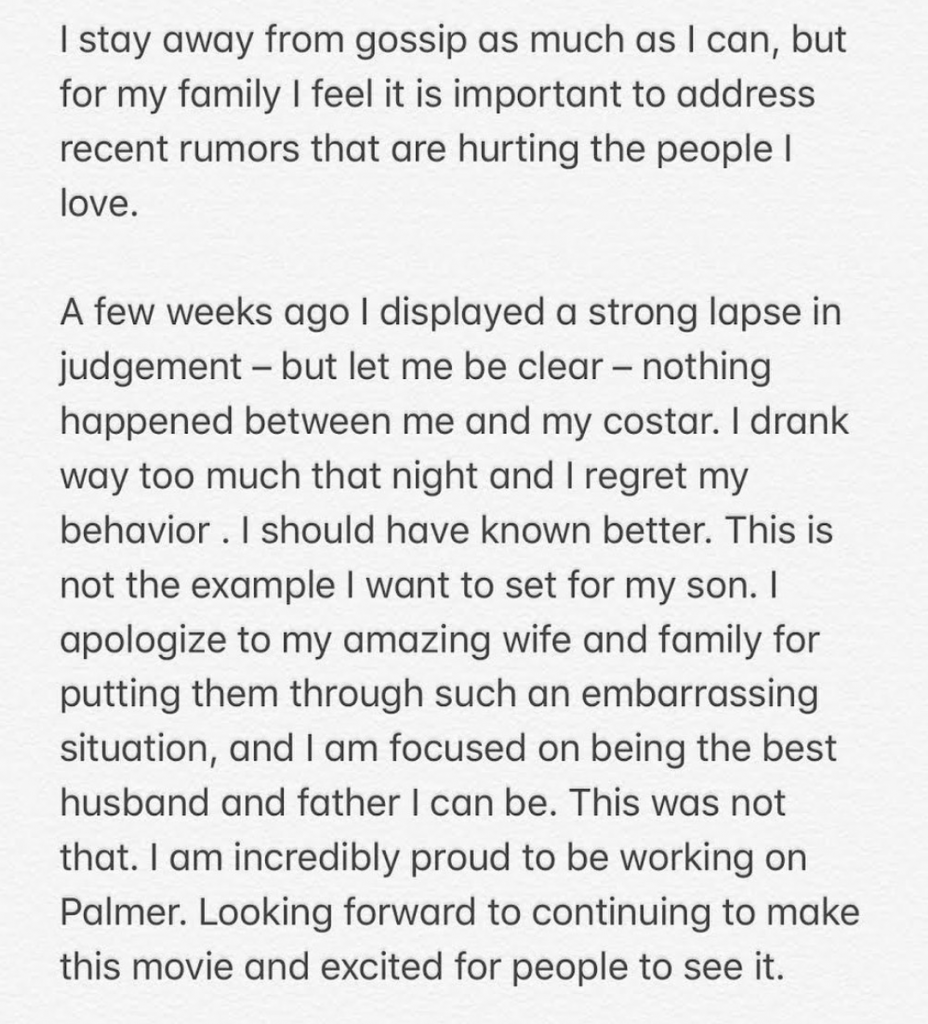 “A few weeks ago I displayed a strong lapse in judgement – but let me be clear – nothing happened between me and my costar.

“I drank way too much that night and I regret my behaviour. I should have known better. This is not the example I want to set for my son.

“I apologise to my amazing wife and family for putting them through such an embarrassing situation, and I am focused on being the best husband and father I can be. This was not that.”

Although many people commended Justin for owning up to his mistake, a lot of people slammed the star for blaming alcohol.

One person commented: “Sorry but baby bye bye bye alcohol is no excuse to disrespect your wife.”

Another wrote: “Love how the first thing he says is that I drank to much… then guess what maybe you need not drink cause it’s obvious you do things that you shouldn’t when you are drinking. Be a man and take responsibility and stop saying it was cause I drank. BS.”

A third person commented: “Sometimes this type of lapse in judgment takes you directly to a long lapse in your relationship..called divorce. Drink less, think more..”

One particularly annoyed fan also wrote: “I would just like to preface that I’m a HUGE Justin Timberlake fan: That being said, this apology is silly AF! Go be with your wife and apologize to HER in person and make things right with HER.”

“And please don’t use the, “I’m in the middle of shooting a movie” excuse, cause if you were truly sorry that’s exactly where you’d be, with your wife. And next time you have someone post a public apology for you on social media make sure you tell them NOT to plug your upcoming movie at the end of it.”

They continued: “You’re guilty as sin, son. The fact that she felt comfortable enough to even rest her hand on your leg in the first place tells me that you two had already gone MUCH further before that night”

“I could not possibly be more disappointed. You need to take a looooong break from the entertainment industry and BE. WITH. YOUR. FAMILY,” they added.