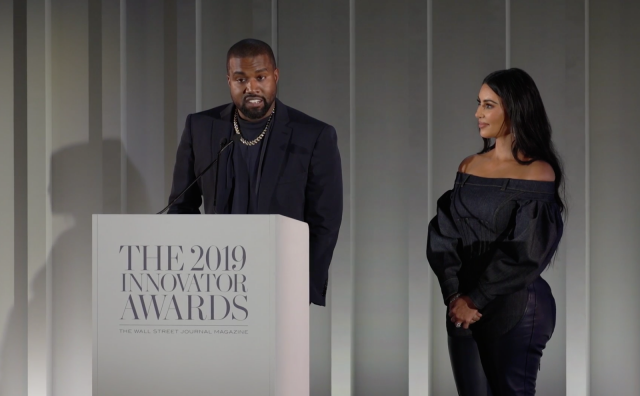 Kanye West has called out people in the fashion industry for ‘talking bad’ about his wife Kim Kardashian.

The a-list couple attended the WSJ Magazine 2019 Innovator Awards at the Museum of Modern Art in New York to present their longtime friend Riccardo Tisci with the Fashion Innovator Award.

Riccardo is the chief creative officer for Burberry, and has frequently collaborated with Kim and Kanye.

Before presenting Riccardo with his award, Kim delivered a touching speech and said: “Riccardo is the first person in fashion to put me on a fashion magazine.”

“I’m so excited to be here for someone that has believed in me before I really knew what fashion was, and really even really believed in myself. I’m so happy for you tonight.”

Kim then stepped aside to let her husband speak, and the Jesus Is King rapper praised the Italian fashion designer for being an “amazing friend” to him and Kim over the years.

“He’s broken down so many barriers in fashion in accepting and bringing hip-hop—I know some people say the culture—bringing culture so early on and being accepting of me and my wife,” Kanye said.

“I remember Carine [Roitfeld] and Riccardo locking arms and just saying, ‘No one’s going to talk bad about Kim and we’re going to dress her.'”

Kanye concluded his speech by saying: “Just to have those friends who really are there for you when they’re the only ones who have the vision and the only ones who believe in you. Riccardo had that vision very early on.”

Kim has previously admitted that it took her a long time to be accepted in the fashion industry.

Earlier this year, the reality star revealed she “cried” after attending her first Met Gala with Kanye back in 2013 – because she felt like no one wanted her there.

She said: “I was Kanye’s plus one & so nervous! I didn’t know anyone and I’m sure no one wanted me there. I did my own lipstick & the color is so off. I went home & cried after of insecurity.”

By the next year, Kim was on the cover of Vogue, and invited to the Met Gala on her own, not as a plus-one.

She has since attended the Met Gala multiple times, and her sisters Kendall and Kylie Jenner have also secured invites to the annual fashion event.