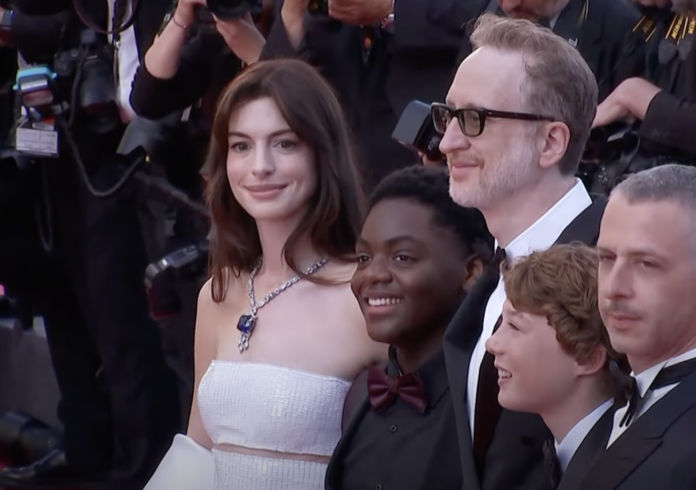 Anne Hathaway has been stealing the show at the 75th Cannes Film Festival this week.

The actress attended the star-studded film festival for the first time, and the 39-year-old has been nailing her red carpet looks.

While attending a photocall for Armageddon Time, which she stars in alongside Jeremy Strong and Anthony Hopkins, Anne wowed the crowd in a Gucci minidress.

The dress featured a black sequinned skirt, and a blue patent leather bustier.

The day before, the actress stunned in a white Armani Privé gown for the film’s official premiere.

The sequinned column dress featured a dramatic bow train and voluminous sleeves, and she completed the look with Bulgari’s Mediterranean Reverie necklace – which boasts 107,15 carats of blue cushion-cut sapphire.

Speaking to PEOPLE on the red carpet, Anne credited her longtime stylist Erin Walsh for choosing her looks.

“You hire Erin Walsh and you trust her,” she said. “You know, I’ve never been to Cannes, and I’ve been watching the fashion of the film festival unfold for a couple decades now.”

“And I noticed that a lot of my favorite actresses had their first-hand experience wearing all white.”

While everyone has been talking about Anne’s red carpet looks, fans can’t get over how young the actress looks.

Taking to Twitter, a host of social media users have commented on her youthful appearance, with some questioning whether she’s discovered the “fountain of youth”.

Anne Hathaway has been lookin exactly like this… this young and pretty… since I was born… and Im in my 20s 💀 https://t.co/juD6bE33zU

Is Anne Hathaway bathing in the blood of the young?! How did she become more gorgeous wtfffff

Did Anne Hathaway discover the fountain of youth????? SHE LOOKS SO YOUNG!!! Like 20 YEARS OLD!!!

Anne Hathaway never gets old like this woman still looks the same, young and beautiful in every generation. https://t.co/KiQQ1BYH7d

Yo I don’t usually care but…. Anne Hathaway looks SO YOUNG?????? https://t.co/oSF1sBEnzs