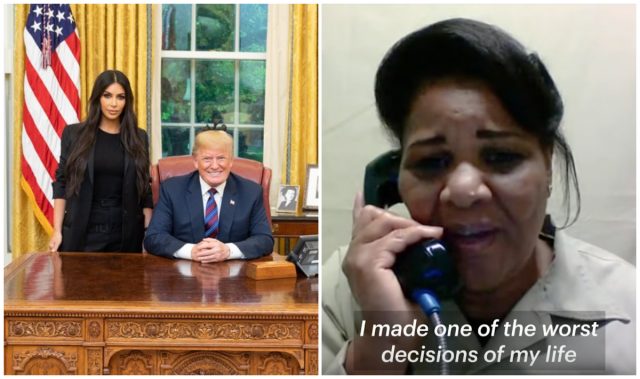 The reality star met with President Donald Trump to ask him to grant the 63-year-old clemency.

Alice was serving a life sentence for a first-time non-violent drug offence, after she was convicted of cocaine trafficking back in 1996.

On Wednesday, the White House announced that it had commuted her sentence, after serving 21 years in prison.

When the news broke, Kim tweeted, “BEST NEWS EVER!!!”

The KUWTK later revealed, “The phone call I just had with Alice will forever be one of my best memories. Telling her for the first time and hearing her screams while crying together is a moment I will never forget.”

She went on to thank President Trump and Jared Kushner, writing, “So grateful to @realDonaldTrump, Jared Kushner & to everyone who has showed compassion & contributed countless hours to this important moment for Ms. Alice Marie Johnson.

“Her commutation is inspirational & gives hope to so many others who are also deserving of a second chance.”

CNN have also released footage of Alice being reunited with her family, following her release from prison.

In a statement, the White House press secretary, Sarah Sanders, said, “Ms Johnson has accepted responsibility for her past behavior and has been a model prisoner over the past two decades.”

“Despite receiving a life sentence, Alice worked hard to rehabilitate herself in prison, and act as a mentor to her fellow inmates.

“While this administration will always be very tough on crime, it believes that those who have paid their debt to society and worked hard to better themselves while in prison deserve a second chance,” she added.

BREAKING: President Trump has granted clemency to #AliceMarieJohnson after meeting with @KimKardashian West to talk about her case last week.

This is her story and the video that started it all: https://t.co/KzxNo3OsSg pic.twitter.com/LU2N05rIdC

The first person was Shalom Rubashkin, a chief executive of a meatpacking company, who was convicted on charges of fraud and money laundering in 2009 and sentenced to 27 years in jail.

After serving eight years in jail, Trump commuted his sentence in December 2017.