Jennifer Lopez and Alex Rodrigues’s relationship seemed stronger than ever on Tuesday at the TIME’s 100 Most Influential People party.

The baseball star was playing the part of supportive spouse as J Lo was being honoured with a spot on the list this year.

The singer has had a huge year as she announced a make up line with Inglot, starred in her NBC sitcom, continued to release new music, all while falling in love and raising her kids.

A-Rod posed for pictures on the red carpet next to JLO along with her mom and sister.

Shoulder to shoulder with some truly strong women. #Time100

He posted a picture to Instagram alongside the Lopez trio with the caption, “Shoulder to shoulder with some truly strong women. #Time100.”

The couple have gotten more serious lately, going on family vacations, spending time with each other kids and reportedly dropping $21 million on a new New York City love nest penthouse.

The latin love birds weren’t the only loving couple at the party though.

John Kraskinki and Emily Blunt were in attendance, as John was being honoured with a spot on the list.

The Office star also had a big year as he made his directorial debut with A Quiet Place, which was released to critical acclaim and became a box office hit.

He also starred in Jack Ryan on Amazon Video, which was just renewed for a second season.

One of the youngest stars being honoured by TIME was Millie Bobby Brown at just 14 years old.

She captured the attention of everyone this year with the second season of the Netflix hit series Stranger Things.

While all the child actors on the show got pay raises for season three, there were rumours that the Eleven actress did her deal separately and is making more than the others.

The pay gap between men and women in Hollywood has become a huge issue within the past year, as it’s been revealed that men make significantly more on the same projects.

I sincerely thank you.

Singer Shawn Mendes was also being honoured on the top 100 list following his impressive year.

He’s been touring the world, while his hits like In My Blood have been dominating the charts.

He recently performed at the Queen’s 92nd Birthday Party at Royal Albert Hall in London.

@time absolute honour to be here tonight. Thank you! 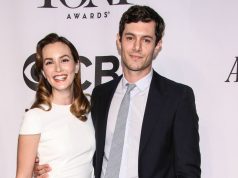