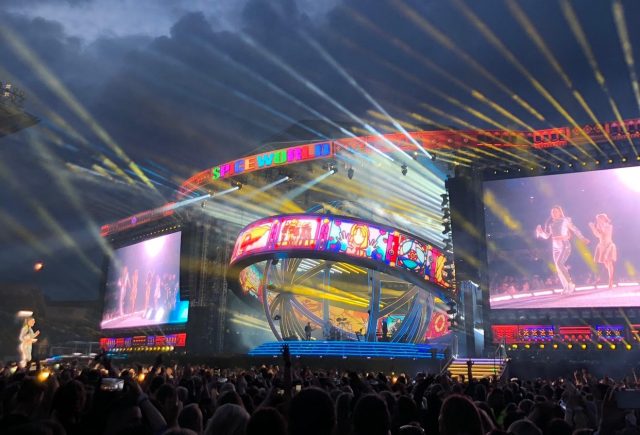 The Spice Girls took to the stage in Croke Park last night, marking the first night of an extensive comeback tour for the 90s icons.

The foursome performed without Victoria Beckham, after she declined to join the tour.

Over 80,000 fans crammed themselves into Croke Park to witness the pop legends – and it was clear to see which Spice Girl each fan resonated with most.

The gig kicked off with a high energy rendition of Spice Up Your Life, and the female-dominated crowd was loving it, as the first of many fireworks fizzed into the sky.

Geri opened the show with a welcoming statement: “Welcome to Spice World. Whoever you are, Spice Girls or Spice Boys, you are all welcome. A king or a queen, we will celebrate you – and there’s a lot of queens here tonight.”

It was the first of many talking points throughout the show, as the foursome took breaks between their hyper energetic set list to reminisce on their history.

“In 1998 we started our world tour here and we are delighted to be back,” said Mel C.

The women wasted no time batting out hit after hit, and the show was as much a production as it was a performance, with endless, Swarovski crystal embellished outfit changes, huge choreographed dance scenes and mega lighting and stage design.

They all stayed true to their original styles, as Mel C donned embellished tracksuit bottoms, Emma Bunton opted for glittery platform runners and dresses, Mel B donned a stunning series of animal print and electric green catsuits, while Geri paid homage to her Union Jack dress and maintained her royal-inspired style in a selection of tiaras.

The show slowed down in the middle, for songs like Viva Forever and Two Become One, before picking up the pace once more to end in a grand crescendo of Wanna Be – which of course was the closing song.

The crowd was also treated to a mini movie ahead of the show’s finale, as Scary, Ginger, Baby and Sporty had pre-recorded their thanks to the fans and shared their hopes for the future of Girl Power.

The girls paid homage to Posh Spice during their sweet rendition of Mama. A series of old snaps of the band mates appeared on stage, after each member dedicated the song to her own children, calling out their names with love. There was not a dry eye in the house during their emotive rendition, as the girls lounged on an Irish tricolour couch to sing the sweet song.

The gals are absolutely wrecking the gaff #SpiceGirls #SpiceWorld2019 pic.twitter.com/1FOnx7fA8s

The couch was not the only dedication the girls made to Irish heritage, as Geri slurped back a can of Guinness at the beginning of the show.

There are clearly no hard feelings between the band members and Posh Spice, despite her refusal to join the comeback tour.

Yesterday, VB took to her social media channels to wish the girls look in their performance: “Good luck to the girls today as they start their tour,” she penned.

The Spice Girls are back! pic.twitter.com/ndSQJN0uxR

As much as it would have been an iconic moment to have all five Spice Girls back on the stage – Posh was not greatly missed as the girls held their own as a power ballad singing, break dancing and inspiring foursome.

While there were some complaints on social media about the audio quality of the concert, from my vantage point the only issue came during the band’s attempted interaction with the crowd mid way through the show, as fans burst into a chorus of Olé, Olé, Olé to show their appreciation, and despite their mics, the girl’s words were drowned out by the crowd.

Overall, it was definitely a successful night for The Spice Girls, and undoubtedly, everyone leaving Croke Park last night felt that a small but passionate childhood dream had been fulfilled.