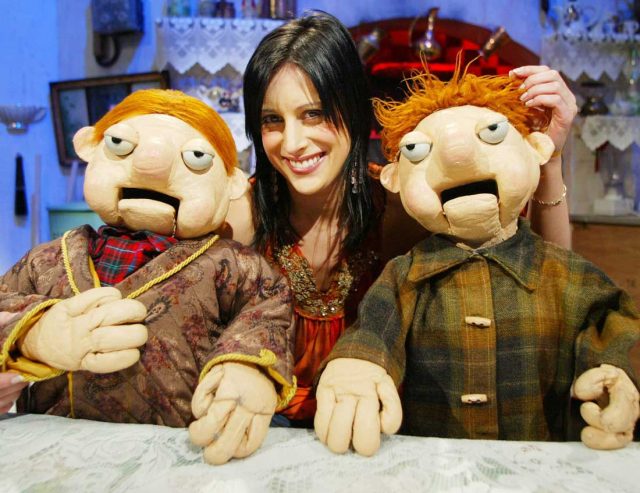 Lucy Kennedy has confirmed plans to bring Podge and Rodge out of retirement, and back on our screens.

The presenter recently fuelled speculation online that Podge and Rodge is set to return, after she shared a photo with the infamous duo on her Instagram.

Now, Lucy has exclusively confirmed to Goss.ie that she’s working on getting them back on telly.

“Now a lot of people have been asking me about Podge and Rodge. The truth of the matter is, I’m trying to get the boys out of retirement!” she said.

“Because they are still single, surprise, surprise! Still calling me Louise and still in smelly aul Ballydung Manor. So I feel like we need to get them out of there and put them back on the telly,” she told Goss.ie at the Xposé Benefit Awards.

However, Lucy admitted that they haven’t agreed to her plans just yet by telling us, “Have they said yes? No! But am I trying? Desperately!”

When asked how Podge and Rodge will cope with the PC world, Lucy said, “Not at all! And I truly believe that after the first episode they would be arrested but then we could do the rest of the show in maybe prison.”

Lucy also teased that if she can’t get Podge and Rodge back on the screen with their own show, they might appear on the next series of Living with Lucy.

“Yes. Definitely. Definitely! There’s a new series of Living With Lucy and one of them might be in Ballydung Manor!”

Lucy also spoke to us about hosting Ireland’s Got Talent, which is set to air for the first time this weekend, and she admitted that she got pretty emotional on set.

“Oh my goodness look, I spent my life crying on the auditionees which was quite funny because usually it’s the other way around.”

“In other countries you know if it’s Ant & Dec or Tyra Banks whoever it is they’re quite professional, whereas with me I was kind of hearing ‘Is the presenter ok?’. Because I was actually crying, like ‘Oh my God I’m so sorry! I’m so sorry you’re going’. I was actually taking every act quite personally.”

“[I’m] way too emotionally invested. But I love it you know? It’s Britain’s Got Talent but it’s in Ireland, and it’s the exact same but it has that Irish charm that you just don’t get anywhere else in the world.