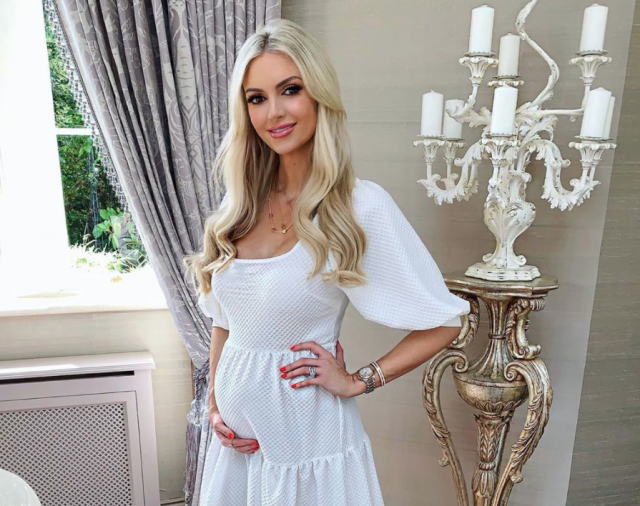 Rosanna Davison has opened up about hearing her twins’ heartbeats for the firs time.

The former Miss World is expecting two boys this November, after suffering 14 miscarriages and having her daughter Sophia via surrogate this year.

Speaking to Georgie Crawford on her podcast, The Good Glow, Rosanna admitted she had never heard a baby’s heartbeat before.

“They found a beating heart, I hadn’t got to that stage in the pregnancy before. I always lost them before they had a heartbeat,” she said.

“We’re probably still in shock, every time I look down and see my tummy or feel them kick.

“I felt almost nervous about sharing our news. I felt guilty for the woman out there who are struggling and still haven’t had their baby joy yet.”

The author also revealed she told her family the exciting news when she hit the 12-week mark.

Surprise! @rosanna_davison is my guest on The Good Glow podcast tomorrow!! We sat down in my house on Wednesday evening and I was glued to every single word she said. Rosanna is expecting twins in November after being told she would probably never be able to carry her own baby. She found out she was expecting identical twin boys during lockdown and to say she is over the moon is an understatement. Rosanna's daughter Sophia was welcomed to the world by a gestational surrogate in November 2019 and less than a year later Rosanna is expecting 2 more babies!! Tomorrow, Rosanna speaks to me about processing the news of her pregnancy, her surrogacy journey, how she dealt with 14 devastating pregnancy losses and how her husband Wes and parents are her absolute rocks. This podcast will make you cry happy tears. After everything that she has been through over the past few years, I think I can safely say on behalf of all of us that we are so happy for you Rosanna! You deserve all the happiness!! This is the last episode of Season 6! Thank you for listening and to my amazing sponsor @sallyhansenuk for helping make this season unforgettable for me. #thegoodglowpodcast #sp #wellness #selfcwre #podcast #surrogacy #pregnancy

“I said: ‘Actually I’m pregnant and we’re having identical twins’. I prepared a cake with blue sprinkles inside. It was sort of bomb after bomb after bomb.”

The Dublin star admitted that she was worried things could go wrong in this pregnancy after everything she has been through.

“When you’ve been through the trauma of pregnancy loss or fertility complications you do set yourself up for ‘What if this goes? I have to prepare myself if something goes wrong because it probably will.’

“So for the past few years, I had set myself up for failure,” she admitted.