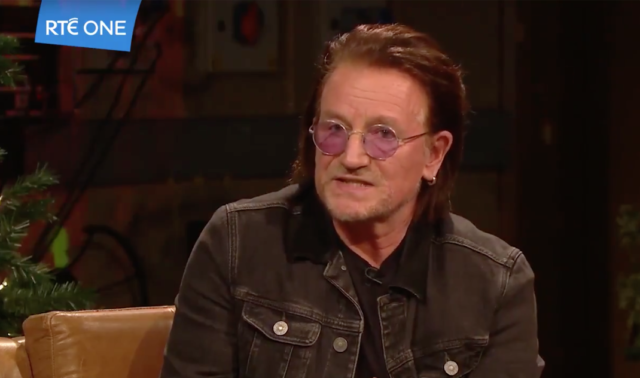 Bono has admitted his U2 bandmates fought over going public with their PPE donation.

Back in April, the Irish rockers were praised for donating €10million worth of personal protective equipment to frontline workers in Ireland – at the height of the coronavirus pandemic.

Bono and The Edge appeared on The Late Late Show on Friday night, and during a chat with Ryan Tubridy, they were asked about their decision to go public with the donation.

Bono, 60, said: “Any public advertisement of giving away money is PR, so I just want to be clear about that.”

“It’s the people risking their lives to help others, they really needed support and deserved support.”
@U2’s Bono and The Edge on why they went public with their support during the pandemic.
#LateLate #SupportSimon pic.twitter.com/gD3axI3Phl

“If we are giving anything publicly, I think you’ve got to accept that its a kind of exercise in self promotion. And we have tried always to avoid that, in this country especially, over the years.”

“Sometimes with Red, or Music Generation, you have to declare yourself because we’re trying to get match money, but on this it was very hard…”

“There was a lot of fighting in the band about this, but we felt we had to come out and show solidarity.”

“You know, if we can’t be really useful, lets find the people who are and try and get them protective wear.”

The Edge added: “You know, we’re so fortunate, and so many people were far more impacted than we were.”

“But actually it’s the people risking their lives to help others, they really needed support and deserved support. So that was really why we went public.”