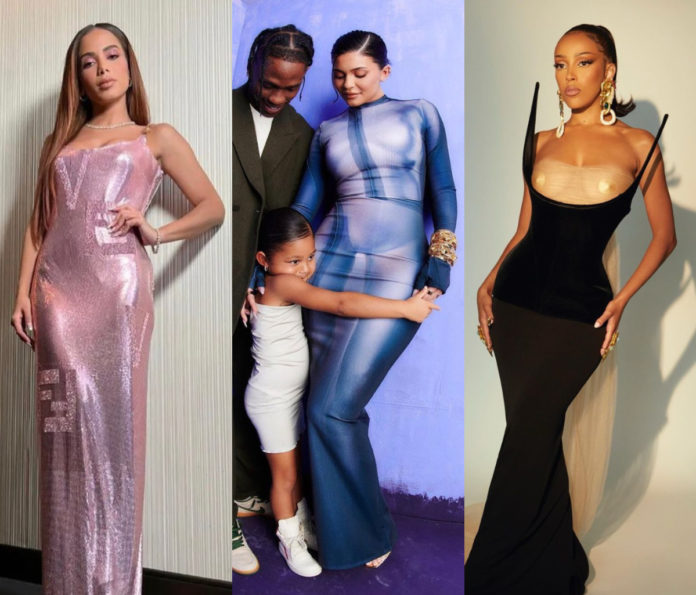 The star-studded awards ceremony was hosted by Diddy at the MGM Grand Garden Arena in Las Vegas.

A host of famous faces rocked this year’s red carpet, including Kylie Jenner and Doja Cat.

Check out our favourite looks from the night below:

The couple attended the event with their daughter Stormi, and Kylie stunned in long-sleeved Balmain dress, which was designed by Oliver Rousteing.

The 24-year-old makeup mogul perfectly complimented her optical illusion gown by wearing her hair in a sleek updo.

The ‘Say So’ singer turned heads in a black Schiaparelli Haute Couture gown, featuring a below-the-bust corset and see-through nude tulle over her chest.

Doja’s accessories were also by Schiaparelli, including gold ear-shaped earrings, toe-shaped shoes and a purse in the shape of Saturn – which was a nod to her ‘Planet Her’ album.

Megan Fox sizzled on the BBMAs red carpet next to her beau Machine Gun Kelly.

The 35-year-old actress stole the show in a plunging David Koma black gown, which also included a thigh high slit.

The Transformers star also rocked a pair of elbow-length silver and black gloves with a crystal floral motif, and clear platform heels.

Becky G was the belle of the ball at this year’s Billboard Music Awards in a feathered lilac number.

The popstar stepped out in a light purple mini dress by Zuhair Murad, featuring a one-sleeve design and crystal adornments throughout.

Becky added a pair of silver platform sandals to top off her amazing look.

Anitta stole the show at the Billboard Music Awards on Sunday night.

The singer donned a pink sparkly metal mesh gown from Fendace, which is the much hyped collaboration between Fendi and Versace.

You can actually buy the 29-year-old singer’s dress online here, but it will set you back a whopping $38,975.

The Brazilian superstar topped off her look with sparkly pink eyeshadow, which perfectly matched her dress.

We loved Latto’s look for the BBMAs.

The 23-year-old rapper, who was nominated for Top Rap Female Artist, hit the carpet in a custom sleeveless black gown by ZIGMAN.

The black gown featured a long satin train, and she completed the look with a number of silver bracelets and rings.

The 27-year-old donned a two toned crop top and skirt with a small ombre train that floated behind her by Mugler.

The rapper topped off her look with collar heels, long sleek hair and a smoky eye look to fit in with her earthy tone design.