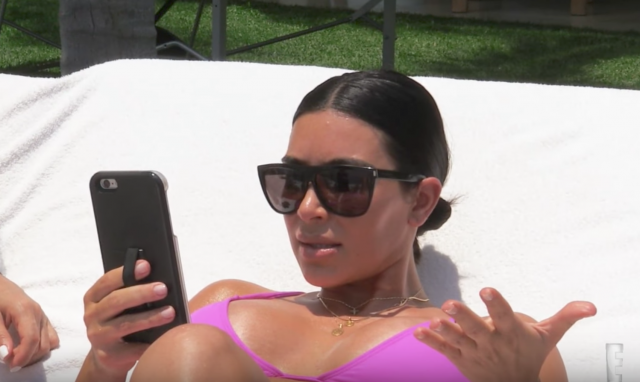 Back in April, unflattering pictures of Kim Kardashian on the beach in Punta Mita, Mexico were published – which sparked fury as fans accused her of airbrushing her own photos.

However, in a brand new teaser for Keeping Up With The Kardashians, fans finally get to see Kim’s first reaction to seeing the alarming images.

In the clip, the reality star’s assistant Stephanie Shepherd hands Kim her phone to look at the pictures, and Kim shouts, “Oh my god. Like, I don’t get it. I literally DON’T look like this!”

After the photos were published, they quickly went viral.

“I need to untag myself in everything,” she said. “I’m literally going to go inside and just start untagging.”

Later, we see Kim, who was robbed at gunpoint in Paris in October 2016, speak to the camera and say, “I’m already having this anxiety attack over security and I’m already on high alert.”

“Just the scrutiny that we get all the time – we try to avoid that. So I’m doing all the steps to try to be as private and discreet as possible, and then you take pictures.

“And if they’re not perfect, people just body shame and criticize you. For people just to think that’s okay is so frustrating,” she explained.

Back in June, Kim spoke about the photos on The View, and said, “I saw these awful photos of myself when I was on a trip in Mexico and people were Photoshopping them and sharpening them.

“I mean, I definitely was not in my best shape — I hadn’t worked out in 12 weeks. I had two surgeries on my uterus,” she said.

“I was already not feeling like myself. And then when people were sharpening them and making them look way worse, and then those were going around. I was like, ‘Okay. I’m gonna get it together.'”