Britney Spears hung out with Kim Kardashian after her performance at the Video Music Awards last night.

The singer and reality star chatted after Britney performed her new song Make Me with rapper G-Eazy, right after Beyonce’s 15 minute long performance.

Kim has been a fan of the singer for years and tweeted out in 2009 that she was “in LOVE with Britney Spears.”

The mother-of-two was so happy to meet the singer she had to capture the moment on her Snapchat.

“It’s Britney b****!” the reality star said as the pair posed together.

Kim teased earlier on in the night that she would be presenting an award to someone that she was “obsessed” with.

The surprise was quickly revealed when Britney responded back saying she couldn’t wait to see the bronzed beauty.

Britney hit a bum note on the night of the VMAs when it was said that she was lip syncing in her performance. 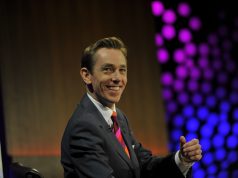