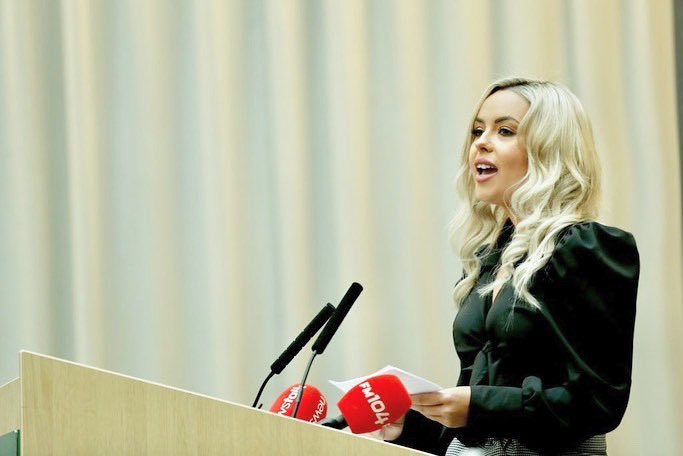 What a week it has been.

I feel overwhelmed, exhausted, proud and relieved that this week is over.

On Thursday I joined the Minister of State Hildegarde Naughton to launch the new Department of Justice campaign to combat the sharing of intimate images/videos without consent.

I’ve known for a number of weeks now that I was going to be putting my face and name to this campaign, but it didn’t make me any less nervous when the big day finally came.

I’ll be honest with you, the last few weeks have taken a huge emotional toll on me. Knowing that I was going to be speaking at a national press conference, speaking to the media and speaking to the public about my ordeal, brought up a lot of uneasy feelings.

It forced me to relive every traumatic moment that led to this day.

The moment I innocently knocked on that man’s door, the glance he gave me that made me realise we were going to sleep together that night, the trust I placed in him when we did, and the second I got a call from a blocked number from a woman telling me my life was about to be ruined.

The panic attacks, the paralysing fear, the suicidal ideations, the regret, the shame, and the embarrassment; these memories all came crashing back into my mind.

I was forced to reconcile my pain and trauma once again as I planned to speak out about this horrible act, that is thankfully now a crime in Ireland.

Today I launched the new Department of Justice campaign to combat the sharing of intimate videos and photos without consent.

In case you don’t know my story – I had an intimate video made of me without my consent and was threatened with its release for years.

But every step of the way, I knew in my heart, that this was the right thing to do.

If you don’t know my story (you can read my full piece here), I had an intimate video made of me without my consent six years ago by a man I trusted, this video was later found by a woman, who threatened it’s release.

I spent five years extremely worried, anxious, depressed, terrified and traumatised, all because someone was holding an intimate video over me. I was blackmailed, intimidated and harassed, I woke up most mornings wanting to die.

That’s an extreme paragraph to read I know, but that is the truth, that is my truth.

And if this horrible experience has taught be anything, it’s that the truth will always set you free.

I felt weighed down by this horrible secret, I felt gagged because I couldn’t openly speak about what had happened to me and I felt ashamed that I had let this happen to me in the first place.

This trauma has felt like a dark cloud over my head since 2015, one I couldn’t run away from. It chased me everywhere I went. It ruined any chance of happiness I had, dulled my sunshine, and it took any hope out of my life.

But I kept going, as heavy as this was on my shoulders, as dark as the cloud was, I climbed my way out of the darkness and into the light. And I’m so glad that I did.

Thankfully now The Harassment, Harmful Communications and Related Offences Bill (aka Coco’s Law) is now in law, and sharing an intimate video or photo is now illegal, as is threatening to share one.

I’m so proud to put my face and name to this ⁦@DeptJusticeIRL⁩ campaign. A very important moment in my life.

It’s amazing to see such great coverage in the media about this 🙏🏻 https://t.co/cLKZeXBdMq

I was honoured to be asked by the Department of Justice to become an ambassador for this extremely important campaign, and can only hope that even just one person feels understood, one person has the courage to report this crime, or even just one person decides not to forward on a picture or video after seeing this campaign.

I want to say a special thank you to Virgin Media News, RTE News, RTE News at One, FM104, Newstalk and TodayFM for all speaking with me individually, so they could shine a light on this important issue.

On Thursday I was asked to share a victim impact statement, and I thought it was important to share this in full.

PS thank you for all of your kind messages, comments and DMs, they have truly meant the world to me.

It’s incredibly difficult to stand up here and say the words “I am a victim”, but this is the reality I have had to face for the last six years because someone I trusted made an intimate video of me without my consent.

At the age of 25, I was faced with a nightmare that no woman or man of any age should ever have to face. The release of a video taken without my knowledge or consent was constantly being threatened.

For six long years, this video was used against me. I was blackmailed, I was intimidated and I was harassed online and in person. At that time, there were no laws in place to protect me.

I couldn’t go to the Gardai, I couldn’t file a criminal charge, I couldn’t even tell people what had happened to me, because I was so afraid that this video would be made public, and that the culprits would face no real consequences if that happened.

I can’t put into words the shame, hurt, and terror I felt for all of those years.

Waking up every morning worrying that this was going to be the day my tape would go viral.

Thinking today is the day another stranger would joke that they heard about my “sex tape.”

As the Department of Justice launches a portal to enable victims of intimate image sharing to report and remove images and videos, campaigner @SweetLikeAli talks to @AilbheConneely about what it means for people affected | https://t.co/ao8cSdefpl pic.twitter.com/P1lsoqfBB1

Thinking today is going to be the day I would take my own life because I couldn’t bear to live with it anymore.

I’ve decided to share my story now, not for attention and not for sympathy, but to show other victims how important it is to speak up and to speak out.

Unfortunately back then I had no help and no way of getting any justice for what happened to me. But thanks to The Harassment, Harmful Communications, and Related Offences Bill (aka Coco’s Law), no one will have to go through this alone ever again.

It is now illegal to take an intimate video or photo without consent.

It is now illegal to threaten the release of an intimate video or photo.

It is now illegal to share intimate photos or videos without a person’s consent.

Hotline.ie is a safe haven for victims, as you can now report this crime, whether you are a victim yourself or you’ve been sent intimate footage. Having this service available when this happened to me would have made a significant difference on the impact this ordeal has had on me.

How can we stop this from happening again?

Every person out there has a role to play.

Firstly, if you’re sent a video or photo and you feel in your gut it’s just not right, you need to question the person who sent it to you. Don’t be the person who forwards footage like this on to your mates, on to your work WhatsApp group.

Let this stop with you…

Secondly, we need to be more active in reporting this crime. Call Hotline, go to the Gards.

Understand that this is now illegal and that someone who is threatening to release footage or is sharing it already without consent, can now face jail time.

People always ask me how I got through this ordeal, and the honest answer: is I don’t know. I’m one of the lucky ones because I’m still alive, and thankfully I’m able to stand here in front of you all today, but not everyone will be so lucky.

I hope my story can give strength to those who feel they don’t have a voice.

I hope it will deter others from taking or sharing intimate footage, and I really hope it will help people to come forward and report this crime.

*If you are affected by the sensitive issues raised in this post, please contact any of the following organisations:

The Column: My New Life Resolution That I Plan On Sticking To

The Column: 7 Things I’ve Learned Through 7 Years In Business