Bobby Norris has announced he’s taking a break from TOWIE after 10 years.

The 34-year-old shared the news in a since-deleted Instagram post, which he shared after watching Sunday night’s show.

In the episode, the reality star got into an explosive row with his ex Harry Derbidge, who Bobby claimed was trying to “rewrite history”.

Amy invites Bobby and Harry to talk out the awkwardness… but things backfire and get even more AWKS! 😬👀 #TOWIE pic.twitter.com/zHLAjnrCkx

In the since-deleted Instagram post, he wrote: “I am VERY sad and surprised that after 10 years the few cast members that have been around nearly as long as me have a problem in speaking up and telling the TRUTH and helping to have my back (which is a shame as I like to think that I have defended every single one of them in their various break ups and fall outs..) “

“Well, NO MORE!! People’s true colours have well and truly been shown tonight.. and it is with a heavy heart that I say after 10 years on the show after next weeks episode I am taking a break from #Towie”

“I just cannot be on a show with my compulsive liar ex boyfriend trying to rewrite history and ruining my life as well as turning my friendship group against me..”

Goss.ie have contacted a rep for TOWIE for comment. 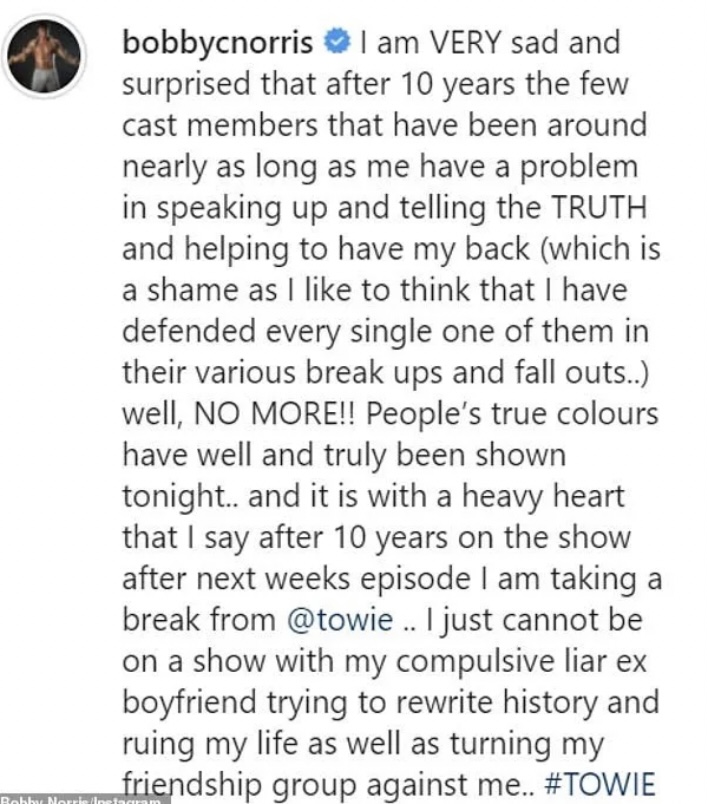