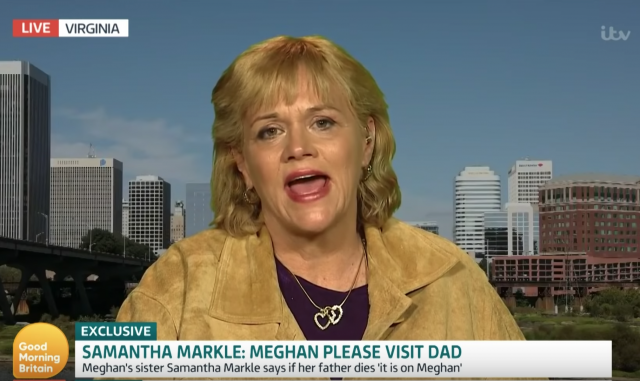 Meghan Markle’s half-sister Samantha has begged her to contact their father, Thomas Markle.

Last week, Meghan’s 74-year-old father issued a public plea for the Duchess of Sussex to contact him – and he said he wouldn’t stop doing press interviews until she did so.

She said, “I think he really just wants to embrace her, and have some closure on the distance, and the misperception and really let her know that he loves her.”

“I feel that he deserves that in return. He’s an incredible man, he’s been there for her entire life and made her everything that she is.”

She continued, “I know she loves him too but there’s been so much of a barrier there. I think it’s really important for both of them that they reunite, for everyone, for our family, for the world.”

“I think it’s really important we stop building walls and start building bridges. I know he wants that,” she said. “I hope they can come to terms on their own, and that she’ll reach out to him. It only seems the right thing to do.”

She added, “I felt as though if something were to happen to him, and he passed away, I don’t think any of us could live with the fact that he died unhappy and there was not closure. I believe in her heart that she would want that also.”

The 53-year-old also addressed reports that she’s “cashed in” on Meghan’s position.

Samantha said, “I’ve worked in media most of my life and in broadcasting. So because my sister is suddenly Royal isn’t grounds for me to stop doing all that.”

“Let’s face it, we all have to survive, money makes the world go round, so if you want to call that cashing in, that’s fine. But no one in media would refuse a paycheck for talking about the Royals and as a family we’re not subject to royal protocol.”

“The media make billions of dollars off social issues and talking about the royals. I don’t see how we’re any different. No one has a copyright on our life experiences.”

She added, “We’re entitled to share that. It’s not disparaging, it’s not harmful. For someone to say, ‘Oh you shouldn’t take any money, you should turn down a paycheck’, go tell your boss you don’t want a paycheck for interviewing me because that’s cashing in.”

Samantha was also asked whether she’s set to enter the Celebrity Big Brother house, after she was linked to the line-up.

Refusing to deny the reports, she replied, “Well, I would tell you, but then I would have to kill you. don’t want to find myself in locks and stocks quite frankly. It wouldn’t be becoming.”