Prince Harry and Meghan Markle posed for pictures outside Kensington Palace this afternoon, after officially announcing their engagement this morning.

The actress showed off her sizeable sparkler, while Prince Harry revealed that he knew she was The One “the very first time we met”.

According to The Sun, the Prince designed the ring himself with two diamonds belonging to his late mother, Princess Diana.

The two outside stones are diamonds from the personal collection of Diana, and at the centre is a diamond from Botswana – which is a country close to Harry’s heart, as he has visited the country many times since he was a child.

Congratulations Prince Harry and Ms. Meghan Markle on their engagement! His Royal Highness and Ms. Markle this afternoon visited Kensington Palace’s Sunken Garden for a photocall to mark the happy news.

Posing in The Sunken Garden at Kensington Palace, Meghan wore a white coat by Canadian brand Line the Label and a dress by PAROSH.

Prince Harry said that details of his proposal would “come later”, but said that it was very romantic.

The couple will live in Nottingham Cottage at Kensington Palace once they are wed next year.

The newly engaged pair will also appear in a television interview tonight by the BBC’s Mishal Husain. 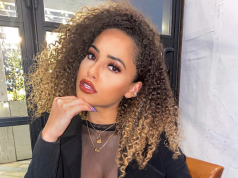