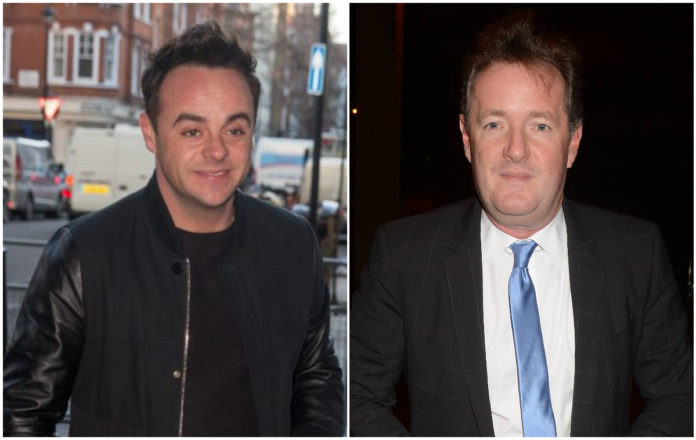 Ant McPartlin has been seen back out and about in London following his month long stay in a private rehab facility for addiction to alcohol and pharmaceutical drugs.

His rehab stint came after his drink driving accident, which resulted in him paying an £86,000 fine, and stepping away from his TV commitments for the foreseeable future.

Piers Morgan, the host of Good Morning Britain and one of Ant’s former colleagues, has been very outspoken about Ant’s situation.

He has said that Ant is going through a crisis, and that it was a mistake for him to leave his wife Lisa Armstrong.

Commenting on it again, Piers used his column in The Mail on Sunday’s Event magazine to share his high opinion of the presenter.

“I can attest that Ant McPartlin is one of the good guys in a business full of nasty pieces of work,” he wrote.

“I’m not one of his closest friends by any means, but we worked together for four years on Britain’s Got Talent and enjoyed many a pint and laugh together after long audition days.”

Piers revealed that despite his high opinion of the presenter, he did not have any sympathy for him or his situation.

“I don’t feel any sympathy for him over what happened, and nor, knowing him as well, do I think he’d want or expect any.”

Piers, who’s never one to shy away from sharing his opinions on matters, said he believed that Ant “needs proper time and help to sort himself out.”

Ant has opted out of his hosting responsibilities beside longtime partner Declan Donnelly, and has not yet confirmed a return to the screen.