Olivia Attwood has become embroiled in a furious Twitter row with her TOWIE co-star Amber Turner.

It all kicked off after Amber told The Sun Online that Olivia had “an issue with someone new every week” during a recent interview.

After spotting her comments on social media, Olivia hit back by tweeting: “Erm just 2 people to date. But whatever you need to do for press.”

The 26-year-old then snapped back at Olivia by replying: “When press turn up to my event & ask me questions about most people on the cast I can say my opinions.”

“They write the article – I’m sure you know the deal. You don’t need to bite to everythingggg. Ohh and it’s defo more than 2 learn to count.”

Their row didn’t stop there, as 28-year-old Olivia tweeted back: “Nope..just 2..maybe 3 now. Wasn’t a bite darling, just found it odd from you [of] all people.”

“Yeh ok, well maybe something interesting will happen in your own life soon and can answer questions about that instead.” 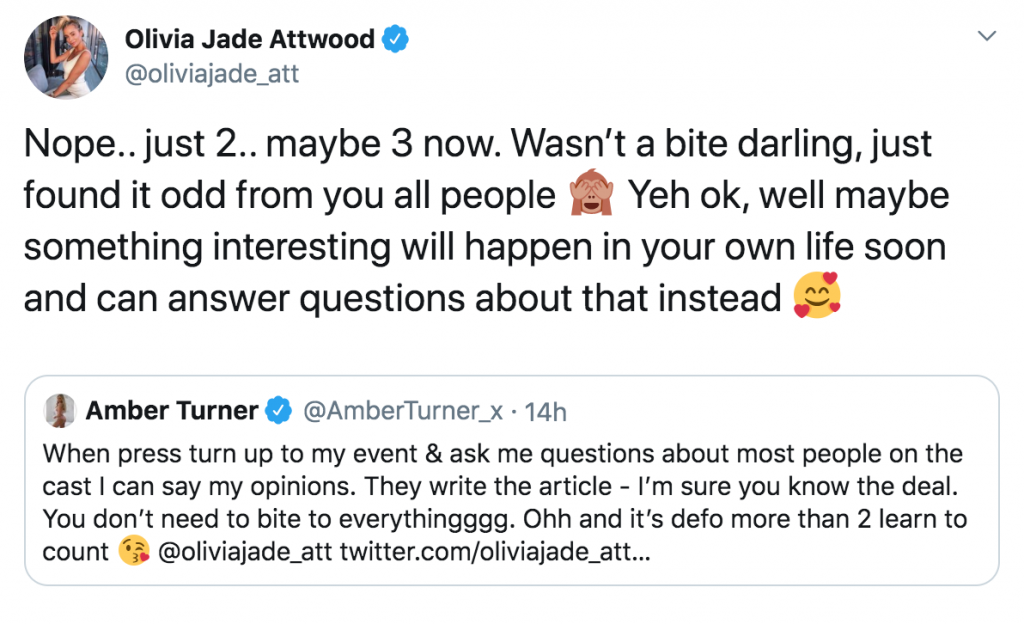 Amber then took their Twitter feud one step further by branding Olivia a “b****”.

She tweeted: “I mean it defo was a bite. Nothing odd about it when your being a b***h to my friends for no reason! & ahh yeaaa let’s hope.”

Olivia, who rose to fame by appearing on Love Island in 2017, has had her fair share of drama since joining the cast of TOWIE.

Just last month, the star got into a furious row with her co-stars Courtney Green and Chloe Meadows while they were in Spain to film the show’s Marbella special.