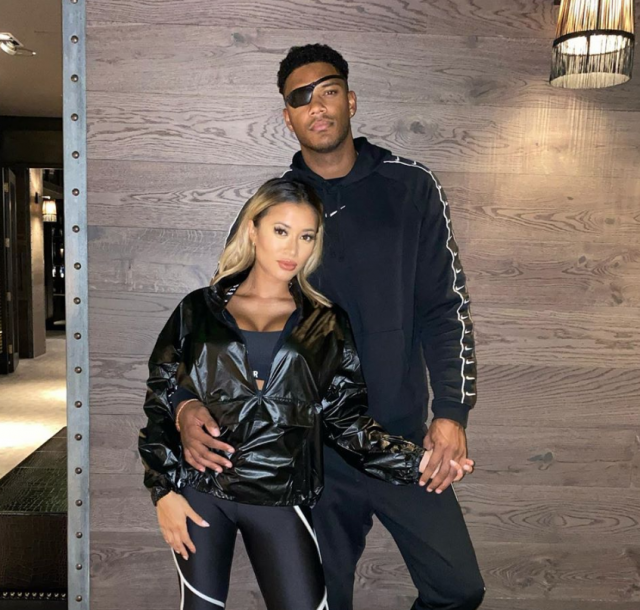 Love Island star Theo Campbell has revealed that Kaz Crossley has dumped him.

The couple first started dating back in March 2019, after starring in separate seasons of Love Island.

Although the pair seemed very loved-up, Theo has confessed their romance is now over.

During an appearance on FUBAR Radio’s Access All Areas show, Theo told host Stephen Leng: “I don’t wanna say too much but I’m gonna say, people these days and love these days, it’s confusing. It’s a tricky hard world.”

“I feel like with us, I kinda gave it my everything and it feels a bit under appreciated. It’s a bit crazy at the moment.’

Theo then said “girls in general are hard to deal with,” before he branded other Love Island stars “mentally unstable”.

He said: “That’s why I never got with any of the other Love Island girls. They’re too mentally unstable. They’re all over the place.”

“I don’t wanna get with none. I’m friends with them but I will never make any of them my girlfriend. But then I met Kaz and thought: ‘She might be different.'”

Theo continued: “We had the best relationship ever. It was the best! The first six months, seven months, amazing. Then it was kinda like, I dunno, something just happened…”

“From all the girlfriends I’ve ever had, you get to the six month magical marker, they get comfy and then start thinking: ‘I’ve got him now, I’ve got him hooked. That is it. I’ll do what I want now.'”

“I feel like girls, they keep their real emotions bottled up for the six months, selling the dream, and then six months they’re like: ‘I’ve got him now and now I can be myself!'”

The Love Island 2017 star also branded himself the “perfect boyfriend”.

“If there was such thing as the perfect boyfriend, it would be my face in the dictionary. The sacrifices I’ve made recently!” he said. “Maybe she’ll feel different in a couple of weeks. Who knows?”